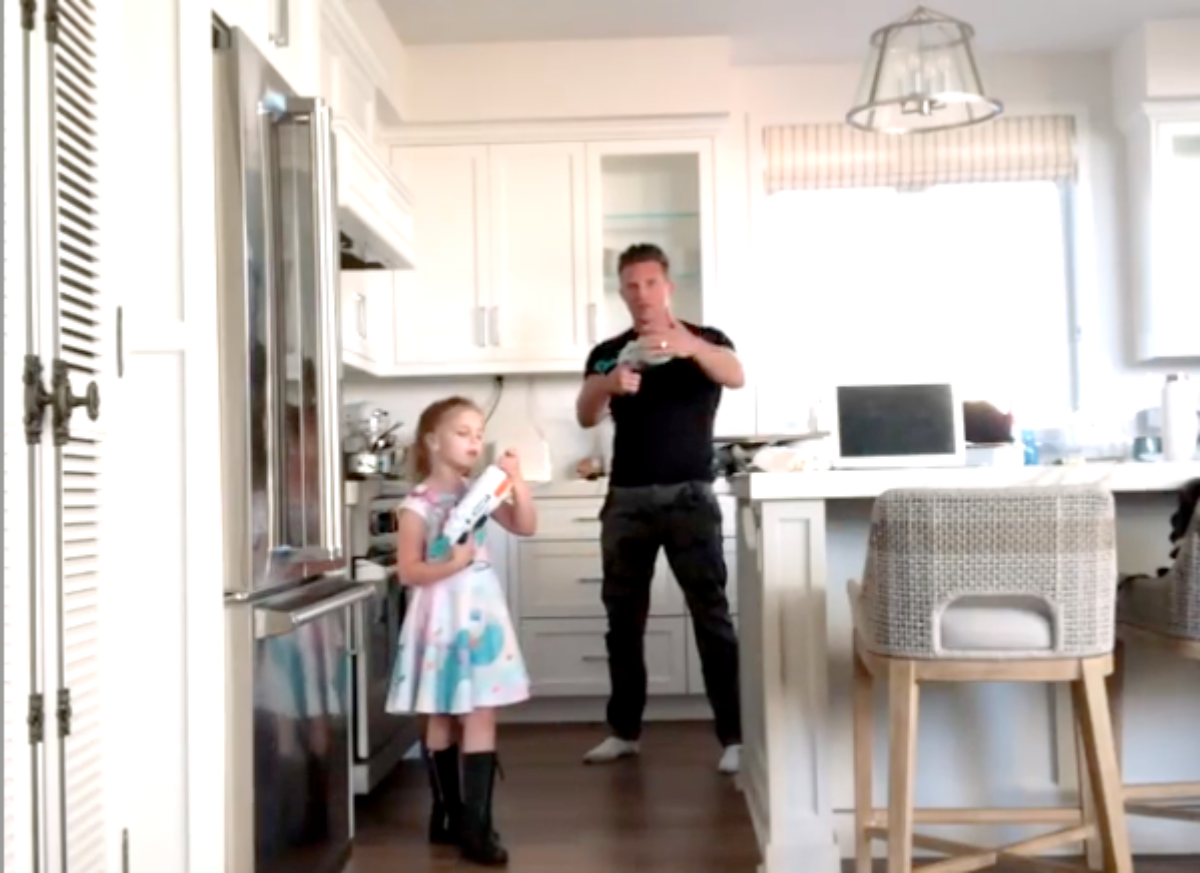 General Hospital Spoilers tease that Steve Burton, General Hospital’s Jason Morgan, practiced target shooting in the house – with his daughter Brooklyn, and with nerf balls and put up a cute film of it on Instagram recently!

General Hospital Spoilers: More About Steve Burton And His Family

He is also related to his former on-screen brother, Sean Kanan, who played AJ Quartermaine on General Hospital by marriage, although the relationship is not explained fully on either actor’s bio. Steve is best known for playing Jason Morgan on ABC’s General Hospital, although he played another daytime drama character, Dylan McAvoy on the CBS daytime drama “The Young and The Restless” for a period of time.

Steve took on the role of Jason in 1991, as Jason Quartermaine, the illegitimate son of Dr. Alan Quartermaine (Stuart Damon) and Susan Moore (Gail Ramsey). He was later discovered to have been half a pair of twins, separated by Heather Webber (Robin Mattson) and Nurse Betsy Frank (Deborah Strang).

His twin, Andrew Cain and Heather’s younger son, Robert Frank “Franco Baldwin” were raised as brothers for a short time until abuse in the home caused Betsy to put Drew up for adoption. When Jason was born, Alan supported him financially, but was fighting for custody over his other son A.J. Jason lived with his mother and step-father Scott Baldwin (Kin Shriner) up until her death.

He briefly lived with Susan’s aunt, Alice Grant (Lieux Dressler) until Alan came to get him. Then he moved into the Quartermaine mansion with Alan and Monica Quartermaine (Leslie Charleson). Monica was initially displeased at having her husband’s illegitimate offspring in the house, but eventually came to love Jason as her own, and adopted him. Jason and A.J. were raised in the Quartermaine mansion, until they were sent off to a boarding school in Switzerland as children.

Originally a bright and ethical teenager whose main ambition in life was to become a doctor, the character would be revamped into a organized crime family enforcer and hitman in the Corinthos Crime Family, after sustaining a massive head injury that resulted in permanent brain damage and substantial memory loss. Prior to the car accident, Jason was depicted as a kind-hearted and affable young man. Since then, however, Jason has been largely depicted as taciturn and largely emotionless, thus the nickname “Stone Cold” and has largely severed his ties with the Quartermaine family.

However, Jason is quite a complex character and has his own set of morals. More recently, Jason has become more involved with what is left of his original family, becoming close to Monica as his stepmother, having had a standoffish but cordial relationship with Drew, mostly due to Drew having known of Jason but being jealous of him growing up; Jason has become stepfather to his niece, Scout Cain (Ella Ramacieri) since Drew’s presumed death and he is close with his and Sam McCall’s (Kelly Monaco) son Danny Morgan. He is also close to AJ’s son with Carly Corinthos (Laura Wright), Michael Quartermaine (Chad Duell) and his son, Wiley Corinthos (Erik and Theodore Olson).

Stay tuned to General Hospital and keep checking Celebrity Baby Laundry frequently for all the latest news, updates and developments!