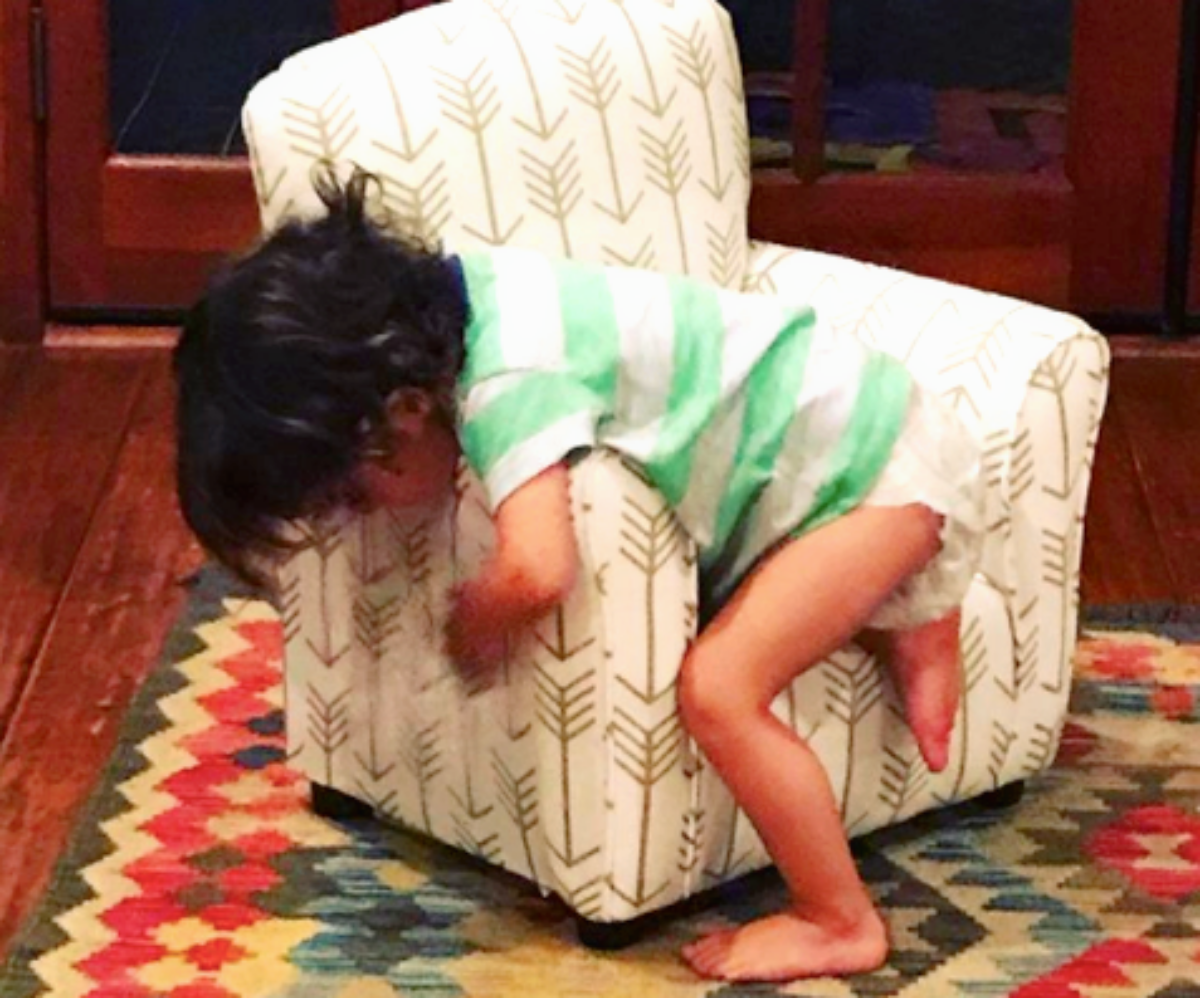 General Hospital spoilers tease that Kimberly McCullough, actor turned director who played Robin Scorpio-Drake as a child through adult on General Hospital, shares that her two year old boy, Otis, hasn’t quite mastered the fine art of sitting in a chair, and sarcastically implies potty training’s not going so well either!

Little Otis looks like he has fallen asleep in his little easy chair in a very awkward position, almost looking like he fell asleep after unsuccessfully attempting to sit in it the right way, and his mother sarcastically implies in the Instagram post that potty training is not going so well either as she commented “Oh and potty training is going super well!”

Otis’ head is hanging over the arm of the little easy chair, one knee is up in the seat with the other foot on the floor! He’s hanging on to the arm of the chair with his own arm as well! Well, if he can’t get sat down right in the easy chair he probably can’t in the potty chair either and we can only imagine what happens then – probably a lot of missed target cleanup duty for mommy Kimberly!

Kimberly has been directing part-time since 2011, and she is also an ABC Director Fellow, shadowing other directors. She was born March 5, 1978 in Bellflower, California and has been a working actor since the tender age of seven months. She made her first TV appearance in a diaper commercial opposite ‘Juliet Mills’.

She attended NYU’s Tisch School for the Arts in 1996-97. McCullough’s mother, a dance instructor, fostered her daughter’s love of dance and, as a child, Kimberly danced on such shows as Fame, Solid Gold, and The People’s Choice Awards.

She made her feature film debut when she was 6 in the 1984 break-dancing musical Breakin’ 2: Electric Boogaloo. Kimberly was a Director in the ABC/DGA Creative Talent Program 2012-2014. In January, 2013, Kimberly directed her first episode of television on the hit Disney Channel Series, Shake It Up! and became a member of the DGA. She also raised 100k for her feature film project Creve Coeur, Mo. on Indiegogo starring Kathryn Prescott, Jenna Elfman and Zach Knighton.

General Hospital fans will remember her first appearance there, in 1985, at the age of seven, walking to her television father, Robert Scorpio, played by Tristan Rogers, in a bouffant dress, hair beribboned, and fluffy socks in adorable “Mary Jane” style shoes, telling him, “Hello, my name is Robin!” She literally grew up before General Hospital fans’ eyes as the child of super spies Robert Scorpio and Anna Devane (Finola Hughes).

Stay tuned to GH, and keep checking Celebrity Baby Laundry frequently for all the latest news, updates and developments!