Tokyo is a fascinating mixture of ultra-modern and traditional Japanese culture with a number of unique and fascinating attractions.

A mixture of traditional Japanese culture and ultra-modern architecture and technology, Tokyo is ever-changing, with its many diverse neighborhoods. The mixture of traditional wooden buildings with glowing, colorful lanterns mixes well with tall, sleek skyscrapers, while hidden and tempting attractions are to be found everywhere.

For those who love art and culture, centuries-old performing arts still play out on stage, while the famous sumo tournaments draw the crowds. A never-ending supply of museums covers everything from pop culture to modern art, technology, or Japanese art history.

The city’s food scene excels in every respect, with Tokyo’s famous celebrity chefs and restaurants all over town. However, the street food culture is equally popular, selling noodles and all kinds of Japanese treats.

It is hard to fully describe all the fascinations of this sprawling city, so we have picked out a few of the more unusual locations to visit on a vacation in Tokyo, Japan. These include the Giant Ghibli Clock, an Alice in Wonderland themed restaurant, and Godzilla’s head.

Please note: During the COVID-19 pandemic, travelers are warned against heading to Tokyo.

Before making any reservations, check with your local travel authority to find out the latest status.

The Giant Ghibli Clock officially bears the name “Ni-Tele Really Big Clock,” and is located in the Shiodome section of Tokyo at the Nittele Tower (Nippon Television headquarters). Atlas Obscura rightfully describes it as the only Vaudeville/cuckoo clock/steampunk/Victorian curio cabinet timepiece in Tokyo.

This wonderful clock keeps accurate time and four or five times a day comes to life. Music plays, while 30 mechanical vignettes in the clock spin, dance, and perform their work, including blacksmiths, two bell-headed piston crankers, a wheel spinner, cannons, and a boiling teapot. Everything moves in a delicate ballet, in some ways similar to an old-fashioned cuckoo clock, while some of the vignettes resemble tin toys from the 19th century.

The clock was designed by Hayao Miyazaki, the co-founder, and director of Studio Ghibli, an anime studio of great fame. Made of copper and steel, the clock stands three stories high, is 60 feet wide, and weighs more than 20 tons.

During the working week, the clock performs four times, while on Saturdays and Sundays it puts on an additional performance. Each starts around four minutes before the hour. Times to note are 12 noon, 3 pm, 6 pm, and 8 pm, with an additional morning chime at 10 am on Saturday and Sunday. Make sure you are there a couple of minutes ahead of the hour to catch the whole show. If you go there after dark, the clock is beautifully illuminated. To get there, take the Yurikamome Line to the Shiodome station

Tokyo in a great city for themed dining, including an Alice in Wonderland-themed restaurant named Alice in a Labyrinth in the Ginza neighborhood. It is actually far more than a restaurant – it is a labyrinth of storybook pages taken from the books of Lewis Carroll, with a stack of massive books that make you feel tiny, just like Alice did.

The main dining room features scenes from Alice in Wonderland, including a ceiling, hung with huge playing cards, hedges from the queen’s garden, and chairs crafted in the shape of rose bushes. Some tables are enclosed in a huge teacup.

Even the food is Alice-themed, including an appetizer in the shape of cards and roses and a delicious ice cream dessert that smiles at you with the face of the famous Cheshire cat. There is so much to see (and eat) here that it takes a number of visits to experience it all. Meet a waitress dressed as Alice herself in the video included below. 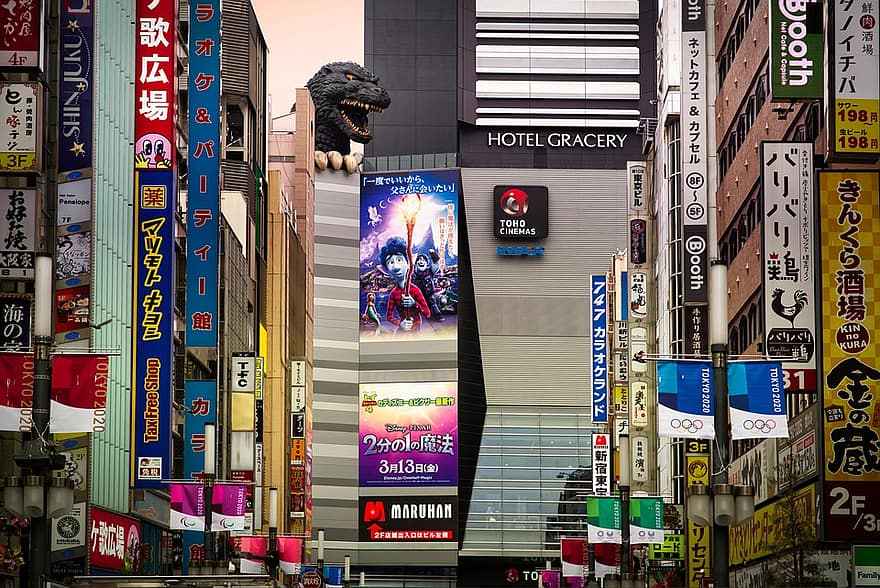 Fans of the Godzilla movies will love this one. The monster that starred in 29 films since 1954 can still be seen in his home town of Tokyo today. Well, his head can be seen at least! The head stands 40 feet tall, which is life-size for the original monster that stood 165 feet tall.

The giant Godzilla head can be seen towering over the Toho Building in Shinjuku Ward. The building is the studio behind the Godzilla film franchise and they added this touch to promote their Shinjuku movie theater complex. Fans can even stay at the Hotel Gracery in the building, which opened in 2015 and features a number of Godzilla-themed rooms. Stay there and be scared!

Take in the unusual and fun side of Tokyo on your next visit and watch this space for more fascinating attractions in Tokyo, Japan.