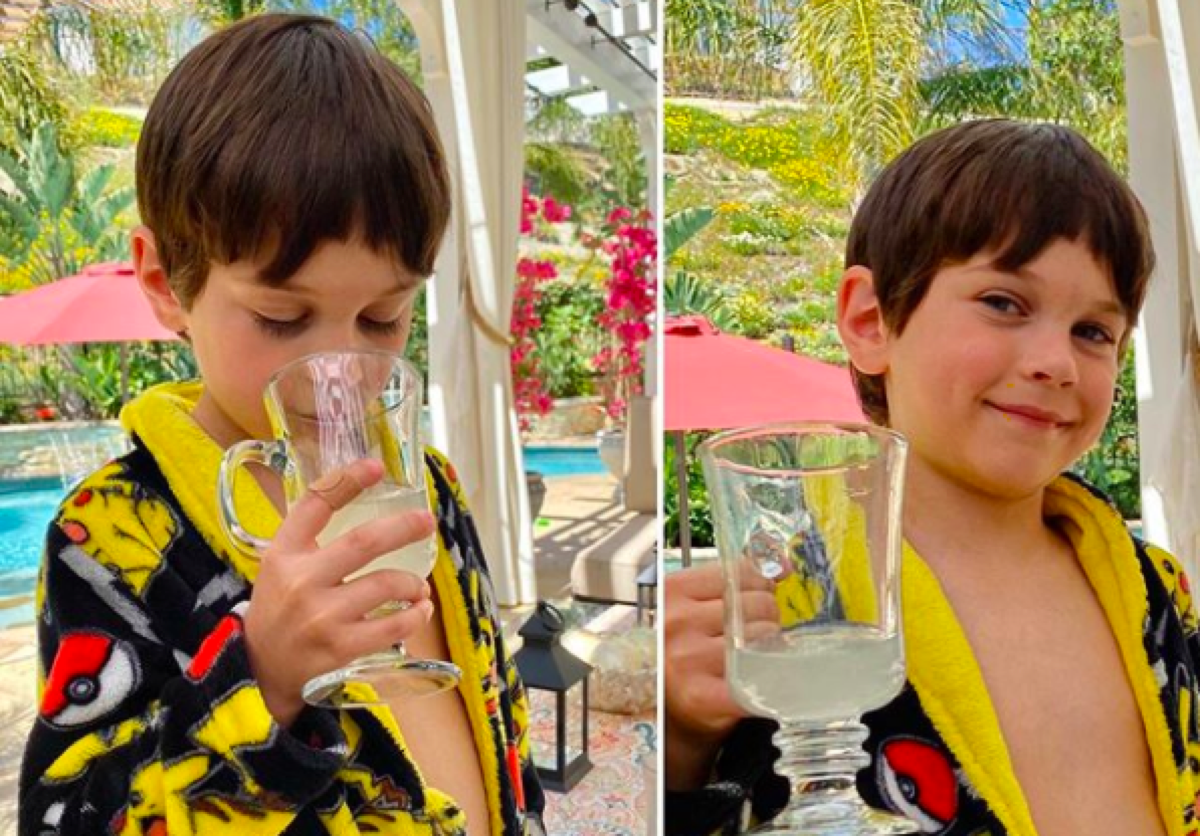 The Bold and The Beautiful spoilers tease that little Henry Joseph Samiri, the six year old actor who plays Douglas Forrester on the CBS daytime drama, is living the life at his family pool, striking a pose like he’s toasting with a glass of what appears to be lemonade in a recent Instagram post.

Little Henry could almost remind fans of The Bold and The Beautiful of a little bitty Dollar Bill Spencer (Don Diamont) with that pose, the look on his face and a bathrobe open like a smoking jacket! If the marriage of Liam Spencer (Scott Clifton) and Hope Logan (Annika Noelle) does happen when the show goes back into production after Covid-19 restrictions are lifted, then Dollar Bill will be Henry’s step-grandpa.

B&B Spoilers: About Henry Joseph Samiri And His Family

Henry does have an older brother, also an actor who played his television father “Thomas Forrester” (Matthew Atkinson) as a child on an episode of the daytime drama, named William Samiri. It appears the two boys also have an older sister from looking at a post from around Christmas of 2019 where the three are seated on a couch posing.

There is also a post on his Instagram account congratulating the sister for winning an ice skating competition but her name is not shown. He is also a community theatre actor following in the footsteps of other family members. He has been involved in various community programs as part of his family’s commitment to such causes. This is little Henry’s first acting job.

Henry’s character, Douglas Forrester, is the son of Thomas Forrester and the late Caroline Spencer ll, played by Linsey Godfrey. He is the unofficial stepdaughter of Hope Logan, played by Annika Noelle, although in the show they do currently have him living with Liam Spencer (Scott Clifton) and Hope, because Hope has fallen in love with the little boy and he with her, even though she is not his birth mother.

Caroline was Liam’s aunt so he is a much older cousin. Caroline Spencer died when Douglas was too little to remember her so in essence, Hope is the only mother he has ever known, and so the two are very bonded and attached to one another and Hope and Thomas were married for a short time. Liam and Hope have saved Douglas from a miserable life with the emotionally abusive, manipulating Thomas!

His most recent Bold and Beautiful storylines had little Douglas making bride and groom t shirts for Hope and Liam and him performing an at home wedding ceremony with baby Beth Spencer (Madeline Valdez) as a witness! How cute is that?! However, production shut down before a real wedding episode could be written and produced so that is still in the future.

Bold and the Beautiful Spoilers: Douglas Forrester Solved A Mystery

Other storylines had Douglas solving a mystery about baby Beth; viewers of The Bold and The Beautiful will recall that Beth was born to Hope Logan on the island of Catalina on January 4, 2019. Dr. Reese Buckingham (Wayne Brady) told Hope and Liam their daughter had passed away during delivery. He also posed as an adoption agent and with the assistance of his former lover, Flo Fulton (Katrina Bowden), who posed as the mother, and illegally adopted Hope’s daughter out to an unknowing Steffy Forrester (Jacqueline Macinnes Wood).

Taylor paid $250,000 to Reese to assure that Steffy would be able to adopt Beth who she named Phoebe after adopting her after her twin sister. For the first few months of her life, she was raised and cared for by Steffy Forrester. The truth about Phoebe Forrester II being Beth Spencer came out thanks to Douglas, when he overheard his father Thomas on the phone threatening Flo about telling anyone the truth about Beth being alive and that she was Phoebe, and if she did she would end up dead, but Douglas told Liam, Hope and Steffy anyway. Liam then went to confront Flo and get her to confirm that Phoebe was indeed Beth and when she did, he went straight to Hope to tell her that Beth is alive and that she is Phoebe.

Stay tuned to The Bold and The Beautiful and keep checking Celeb Baby Laundry frequently for all the latest news, updates and developments!