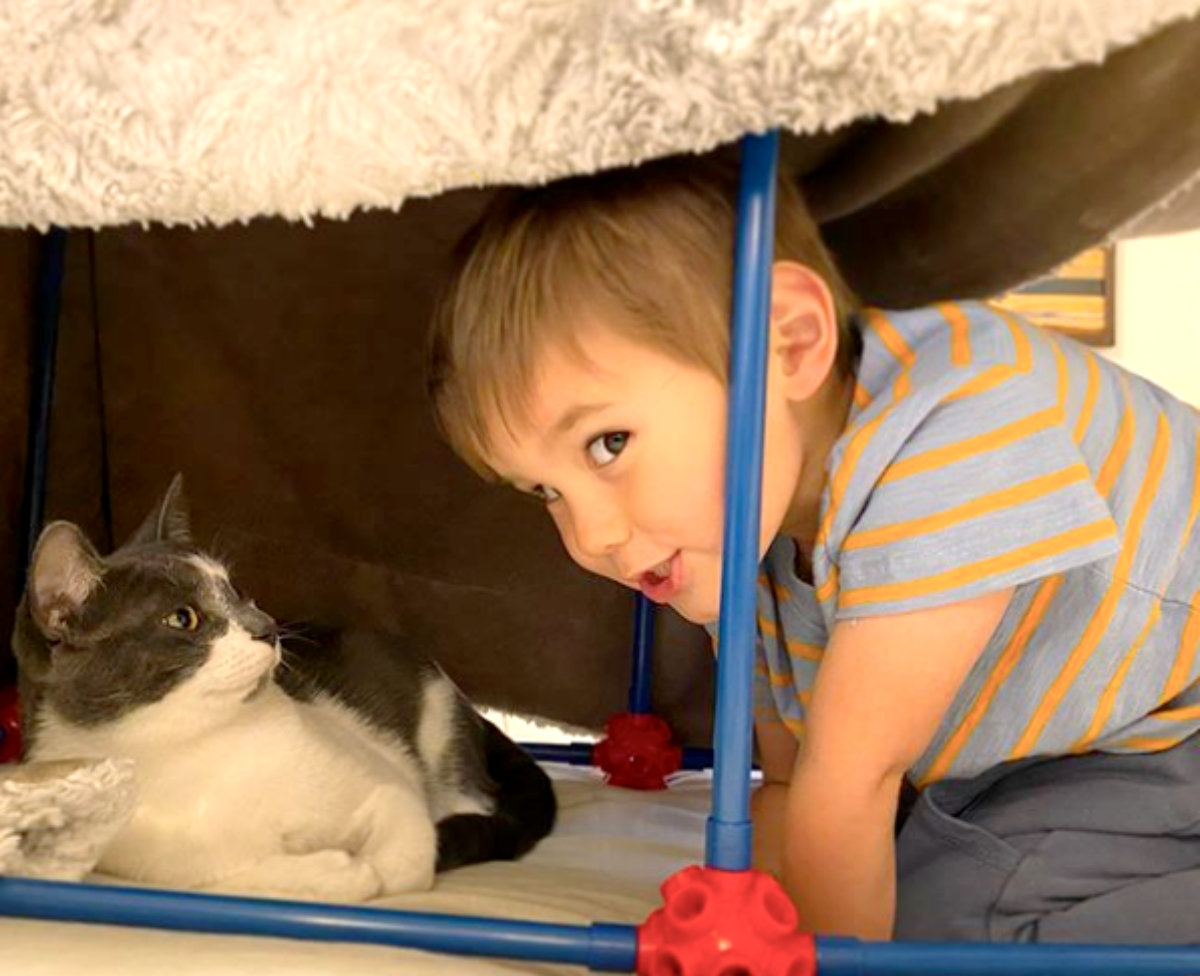 The Bold and The Beautiful spoilers teases that Ford Clifton, three year old son of actor Scott Clifton, loves to hide out with Bill the cat and demonstrates it in a recent Instagram post!

The photo shows Ford hiding under what looks like a fuzzy tent of some sort up on a bed, as you can see that he and Bill the cat are on a soft surface. Scott comments, “Meta-Quarantine” in an attempt to be humorous! The Cliftons are a family of cat lovers and have two others besides Bill, who was given to them by Don Diamont, and obviously named after the character “Dollar Bill Spencer” who Don Diamont plays, and father to the character Scott Clifton plays, “Liam Spencer” on the CBS daytime drama “The Bold and The Beautiful”.

The Bold and The Beautiful Spoilers: Kelly Kruger Brooks, Darin Brooks And Baby Everleigh Try To Cope With The Crisis And Stay At Home And Offer Advice

When the family first got Bill, Scott posted it on Instagram as well, commented “About a week ago, @dondiamont called me and asked if the Clifton clan had room for another member: a 12-week old kitten his father-in-law, a lifelong cat person, could tragically no longer care for. We told Don that if nothing else we’d be happy foster her until we found her a home—so he brought her over.

She was playful and affectionate and cute as hell, and, well… not a “she” at all, if her giant cat balls had anything to say about it. “Wait, you’re telling me she’s a ‘he’?!?” Don roared when we broke it to him. The only question was whether our new houseguest would get along with Walter and Amy. It’s not @nikkishoots’ and my first rodeo, so we knew to introduce them slowly: first just with smell, through a door, then sight, then food, then play.

Walter loved him immediately (because of course he did, the big dumb gentle giant that he is). Amy took a few more days, but as I write this, they’re napping together. The newcomer loves Ford and his youthful energy, too. (Not to mention the boy is a certified expert with laser pointers.) I’ll cut to the chase: he’s already part of the family and we’re keeping him.

So, everyone, meet Bill. (Or “Billy”, as Nikki’s begun to dub him.) Now you have an onslaught of kitty photos to look forward to. You’re welcome/I’m so sorry.” Walter and Amy are the Clifton family’s other two cats and Nikki is Scott’s wife and Ford’s mother. Walter, Amy and Bill have become Ford’s “guard cats” and best furry friends!

The Bold and The Beautiful Spoilers: Jacob Young Celebrates His Daughter's Birthday https://t.co/zWNjTF8cdQ

He was born and raised in the greater Los Angeles area, and gained interest in acting at a very young age: he was just 9 years old when his mother gave him a copy of Shakespeare’s “Hamlet” and introduced him to a friend who was an actor. At age 16, Clifton appeared in commercials and scored his first professional acting jobs. Later, he guest starred on such TV shows as “Roswell” and “Judging Amy” and landed parts in some rather lackluster movies, but his big break came when he landed the role of Dillon on General Hospital!

You can see Scott as Liam Spencer on “The Bold and The Beautiful” on CBS. Keep checking Celebrity Baby Laundry for all the latest news, updates and developments.