The Young and The Restless Spoilers: Kevin and Chloe Have Drama On The Way To Childbirth 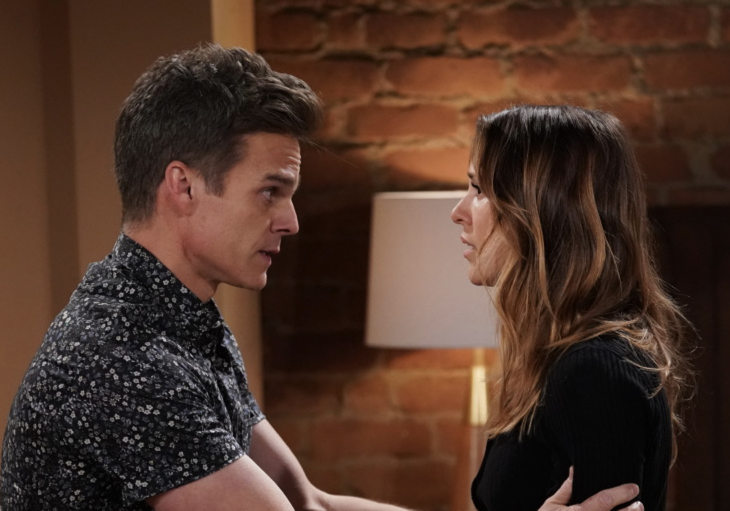 CBS The Young and the Restless spoilers tease that it’s almost time for irascible Kevin Fisher (Greg Rikaart) and his lovely wife Chloe Fisher (Elizabeth Hendrickson) to meet their new baby but before they do a boatload of drama is headed their way.

We already know that Chloe had a false pregnancy scare, what in the world could happen next to the expectant parents?

According to Soap Opera Digest, the wacky couple is in for some turbulence as fall arrives. Their baby is on the way but as we’ve seen in the past, anything and everything can happen in the lives of these two lovebirds.

The Young and the Restless Star Elizabeth Hendrickson Is ‘Walking Into The Weekend Like….”

In the past Chloe had Braxton-Hicks contractions that scared the daylights out of her and Kevin. It happened during a party at their house and his brother Michael Baldwin (Christian LeBlanc) and sister-in-law Lauren Fenmore (Tracey Bregman) were present.

The Young and the Restless spoilers – In the end Chloe and her baby will be all right?

The night started off well but a snowstorm hit adding stress to the festivities. Then Chloe thought she was in labor, which would have been much too soon. Luckily, the doctor was called and it was determined that she was actually experiencing Braxton-Hicks contractions. Could this event be a precursor to something more serious befalling the happy couple?

This event took place before the show went on a production hiatus in March. At that time COVID-19 disrupted the world in major ways, and in many ways, life has not been the same since.

RT if you love celebrating Chloe and Kevin! #YR pic.twitter.com/xtwJMguHyO

The Young and the Restless spoilers – What will happen next for Chloe Fisher and Kevin Fisher?

Eventually the show ran out of original content and as a result the show aired encore episodes. This month the soap returned to the airwaves with brand new content after going back to production in July. It has been speculated that while the show was off the air, execs may have tinkered with storylines, deviating from past scripts and/or doing wholesale rewrites. Could this have been the case with Chloe and Kevin and their pregnancy story?

They have been through so much together, and on their own, that we are hoping that all goes well for them in the future. By the sound of it, we shouldn’t have too much longer to wait to see how their drama unfolds!

The Bold and The Beautiful News Update: Denise Richards Dishes On The Challenges Of…