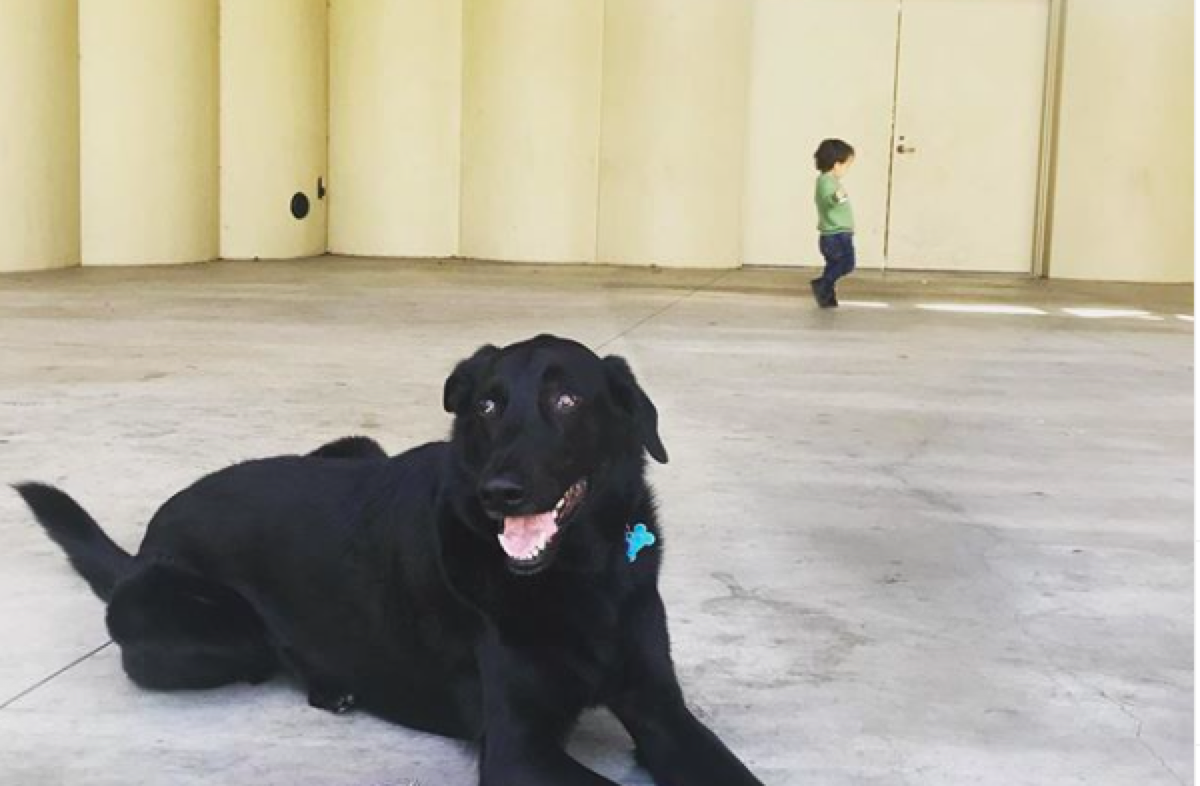 General Hospital spoilers teases that actor-turned director Kimberly McCullough absolutely loves her life – her little two year old boy, Otis – and her great big black dog, whose name is Jack, and who she posted a photo of showing both recently on Instagram – fur babies count as babies too, right?

GH Spoilers: Kimberly McCullough Posted A Photo Of Otis In the Distance And Doggie Jack Up Front

Otis and doggie Jack appear to be in a large garage type room, and Kimberly posted “I mean… how did I get so lucky?” It’s plain to see Kimberly loves both her fur baby and her real baby by the amount of photos she posts of each of them on Instagram! Kimberly herself literally grew up on television, playing Robin Scorpio on the ABC daytime drama “General Hospital” and recently retired from acting to go into full time directing.

She posted the following when she announced her retirement on Instagram: “This decade I … Picked the right guy, lost a baby, had a baby, found my Jack, moved into my dream home, got my DGA card, worked with talented and kind people, retired from acting, became a Ojai mom , received a hand written note from Kyle MacLachlan and directed 25 episodes of television. It’s been a wild ride and I’m grateful.”

I mean… how did I get so lucky?

Kimberly has been directing part-time since 2011, and she is also an ABC Director Fellow, shadowing other directors. She was born March 5, 1978 in Bellflower, California and has been a working actor since the tender age of seven months. She made her first TV appearance in a diaper commercial opposite ‘Juliet Mills’. She attended NYU’s Tisch School for the Arts in 1996-97. McCullough’s mother, a dance instructor, fostered her daughter’s love of dance and, as a child, Kimberly danced on such shows as Fame, Solid Gold, and The People’s Choice Awards.

She made her feature film debut when she was 6 in the 1984 break-dancing musical Breakin’ 2: Electric Boogaloo. Kimberly was a Director in the ABC/DGA Creative Talent Program 2012-2014. In January, 2013, Kimberly directed her first episode of television on the hit Disney Channel Series, Shake It Up! and became a member of the DGA. She also raised 100k for her feature film project Creve Coeur, Mo. on Indiegogo starring Kathryn Prescott, Jenna Elfman and Zach Knighton. Kimberly recently Directed an episode of KC Undercover, starring Zendaya and will be Directing as episode of Pretty Little Liars in the upcoming season 6.

General Hospital fans will remember her first appearance there, in 1985, walking to her television father, Robert Scorpio, played by Tristan Rogers, in a bouffant dress, hair beribboned, and fluffy socks in adorable “Mary Jane” style shoes.

You can find plenty of General Hospital scenes with Kimberly McCullough at all ages on You Tube, and check Celebrity Baby Laundry frequently for more news, updates and developments!