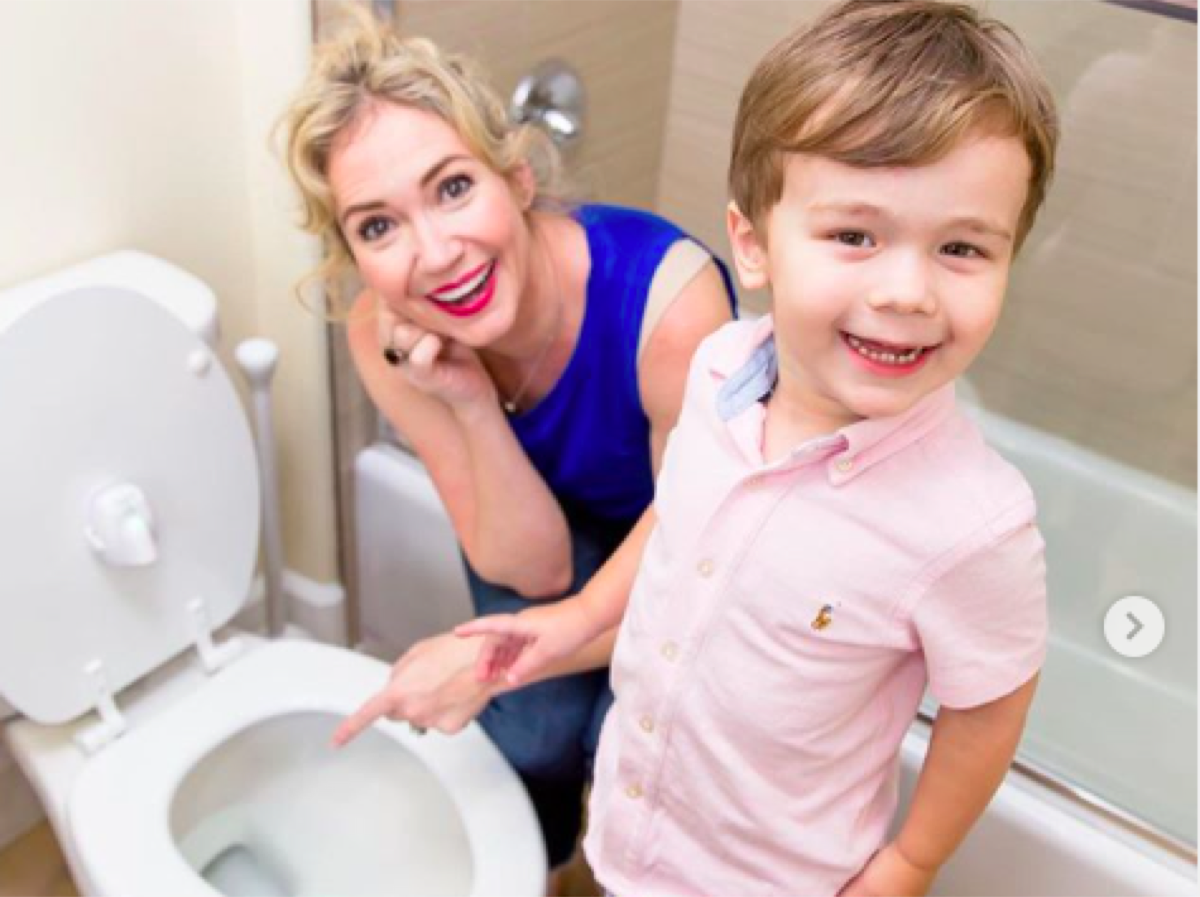 The Bold and the Beautiful spoilers teases that actress Ashley Jones has a fun toilet target method for her little boy Hayden Joel Henricks and she posted about it recently on Instagram.

She posted a photo of herself and Hayden in the bathroom with him proudly standing on a little stool in front of the toilet, and posted as follows: “Calling all MOMS and DADS…SO…Hayden and I are working on a project. A pee project. I am hoping the pee goes where we want it to!!! And no where else. Boy parents feel me? Anyone else constantly cleaning up! so yesssss @toddlertarget Hayden loves this and I had to share —- Swipe to see. Hayden was potty trained seated. How did you potty train your little one? If you did it sitting, did you teach a transition to standing?

I’m using #toddlertarget to get him used to standing up so he can easily do it in public places. Genius idea for so many reasons…a MOTION DETECTOR turns a “target” light on- for peeing IN the toilet IN the right place, but also, the target light acts as a night light for transitioning out of pull-ups at night. (Great for girls, too!) And I have a feeling it could help more than just toddlers….. wink, wink. toddlertarget.com I’ll also put a swipe up in stories #toddlertargetpartner #boymomadventures #boymomlife #toddlerlife #pottytraining #pottytrainingboys #pottytrainingproblems #ashleyjones #haydenjhandmommy #singlemom #singlemommy #fulltimesingleparent #lifehack.”

Mothers of little boys should be able to relate to getting their little men to “stay on target” without having to actually paint one in the back of the toilet bowl, and Ashley has a great idea here. She humorously hints that it could help more than toddlers, as any woman with a man in the house who can’t “stay on target” will relate to! Hayden is three years old, and she has an older boy, Huck who is seven. This “toddler target” is definitely a great idea! Hayden looks very proud of himself in the photo!

Ashley Aubra Jones is an actress, and is probably best known for her roles as Parker Forsyth on the ABC daytime drama “General Hospital”, Dr. Bridget Forrester on the CBS daytime drama “The Bold and The Beautiful” and Megan Dennison on “The Young and The Restless”, also on CBS.

She also has appeared in several made-for-television movies such as “You Killed My Mother”, “Homekilling Queen”, and “12 Days Of Giving” as well as some primetime television series such as “Major Crimes”, “9-1-1”,” NCIS”, “NCIS Los Angeles”, “CSI: Cyber”, “CSI”, “CSI:NY”, “Private Practice”, ”House”, “The Mentalist”, and many others, and has also done some production work, namely TV movies “The Secret Sex Life of a Single Mom “, “A Sister’s Revenge”, “Secrets From Her Past”, and “Dead At 17” as executive producer as well as acting in the movies! She will be reprising her role as Dr. Bridget Forrester soon on the CBS daytime drama “The Bold and The Beautiful” so keep an eye out for her.

Check out CBS’s “The Bold and The Beautiful” to see Ashley as Dr. Bridget Forrester and keep checking Celebrity Baby Laundry frequently for all the latest news, updates and developments!

The Bold and the Beautiful Star Ashley Jones Gets Real About Life, Love, Loss and…