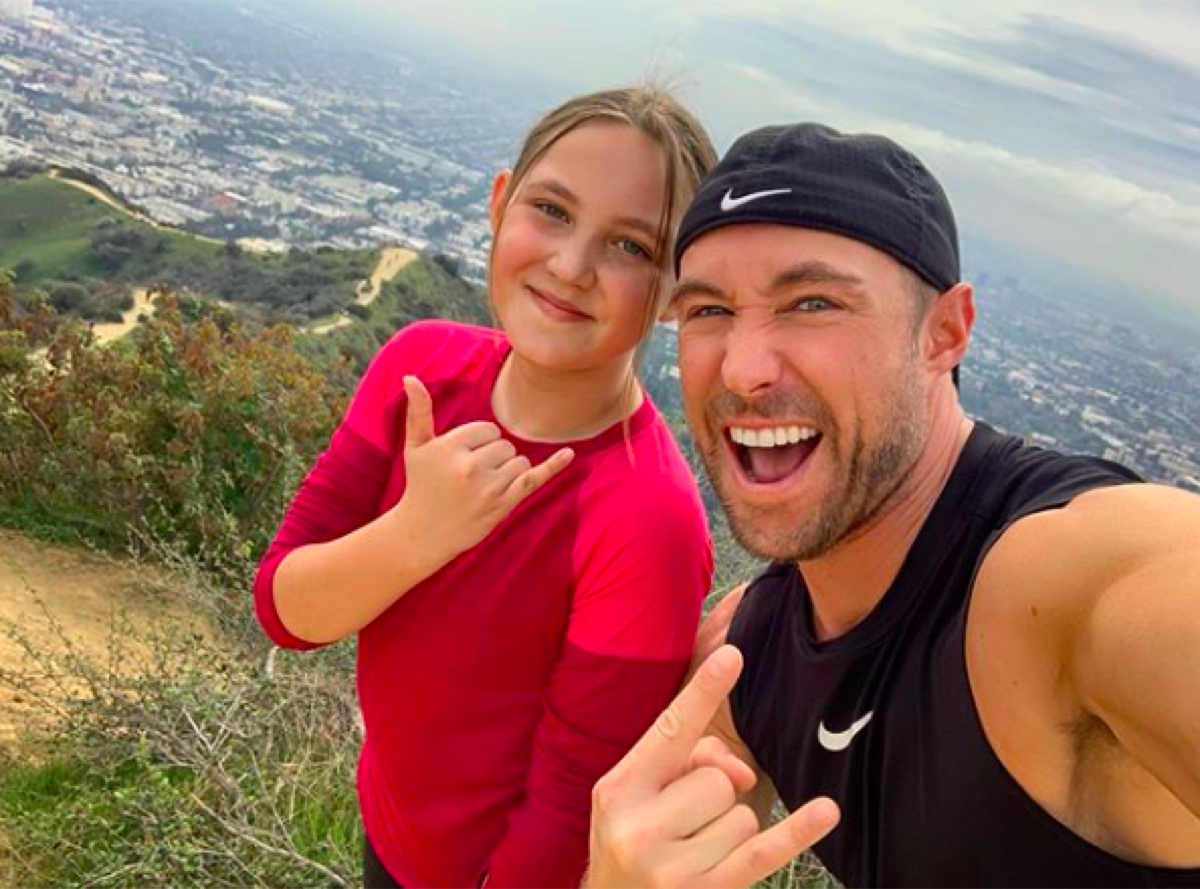 Days Of Our Lives reveals that actor Kyle Lowder gets a good workout by taking his daughter for a mountain hike!

Isabella Reese Lowder is ten years old and is the daughter of divorced parents, Kyle Lowder and Arianne Zucker, both known from NBC’s Days of Our Lives. Kyle formerly played Rex Brady, and before he played Rex, he played Brady Black. Arianne plays Nicole Walker and the two met on the show although things didn’t work out. One happy result of their union is their daughter Isabella.

Kyle also played Rick Forrester on CBS’s The Bold and The Beautiful. He recently starred in and produced a movie, called “A Mermaid For Christmas.” Kyle posted a photo of the two on Instagram, and wrote: “Training buddy.”

Days Of Our Lives Spoilers: More About Kyle Lowder

Kyle Lowder is an Emmy-nominated and award-winning actor and producer. He was accepted into the School of Visual and Performing Arts at Syracuse University, and began their intensive BFA Drama program. However, in early 2000 during his sophomore year in college, an invitation to attend a talent showcase in Los Angeles immediately relocated him to the west coast. Kyle signed with representation shortly after his arrival in Los Angeles and signed modelling contracts with ABERCROMBIE & FITCH and SPEEDO.

In July of 2000, five months after his relocation from New York, Kyle landed a three year contract role with the NBC daytime drama, DAYS OF OUR LIVES, a role that would later bring him an Emmy nomination in 2003, when he was playing the part of Brady Black . After a six year run on DAYS Kyle moved networks to CBS, signing a contract with THE BOLD AND THE BEAUTIFUL. He would leave that role in 2011 to pursue a new opportunity in the music industry. After a year of recording and touring in Italy to promote his self-titled debut album, Kyle hit the stage with the original Las Vegas company of Broadway’s ROCK OF AGES playing ‘Stacee Jaxx.’

Following a year in Las Vegas, Kyle returned home to Los Angeles to begin work as the executive producer of LADIES OF THE LAKE. He also stars in the miniseries, which is currently in it’s second season and airs on Amazon Prime Video. Most recently, Kyle returned to DAYS OF OUR LIVES in a contract role playing Rex Brady and left again last spring.

Three-time Emmy-nominated actress Arianne Zucker has played many roles, but she is best known for the character of “Nicole Walker” on NBC’s hit daytime drama, Days of Our Lives. Arianne began playing her role in 1998 and has received three Daytime Emmy nominations and one Soap Opera Digest Award win for her portrayal as the unlucky-in-love vixen. Arianne began her career in modeling, when she was 16 years old. She immediately traveled to Paris, France after winning her first modeling contest.

From there, she has traveled to Australia, Japan and finally back to New York City. During this time, Arianne also booked many national and international commercials, such as Mazda Miata and McDonald’s. Arianne’s independent film career started with a short film called Looking for Bobby D in 2001 and she began to generate work in television by landing the role of “Brenda Collette” in CSI: Miami in 2002). Her work was noticed by writer Karen Harris and Arianne was asked to play the role of “Winnifred Marshall” in Life in General, a comedy based on the life of a writer and the behind the scenes of the making of a television show.

Arianne continued on as “Jessica” in the horror film, The Last Resort, directed by Brandon Nutt. “Devantiy”, an Emmy-nominated web series chose Arianne to guest star as Julie Regis the uptight sister of Andrew Regis, the ruthless jewelry scion. Another film role was in The Contractor as Kate, the best friend of “Elizabeth Chase” (Christina Cox). Her latest film role is in post-production for Lifetime and called The Assistant in which she plays the lead role of “Suzanne Austin”.

While not working on “Days of Our Lives”, Arianne co-created the non-profit organization, Arrow-Heart Adventure Camps, in September of 2007 with her brother, Todd Zucker. They are a brother-sister team that believe in positively, mentor-ship and giving teens a chance to live to their full potential. Todd and Arianne have since tested the adventure camp in three different countries, U.S. London, England, and South Africa. They are committed to enriching the lives of young teens through a challenging outdoor adventure and want to inspire kids to want to make better choices, build character, confidence, credibility and critical thinking skills.

Watch for Kyle in “Ladies Of The Lake” on Amazon, and Arianne on NBC’s “Days of Our Lives.” Keep checking Celebrity Baby Laundry for the latest baby and teenager news, updates and developments!

The Bold and The Beautiful News Update: Denise Richards Dishes On The Challenges Of…