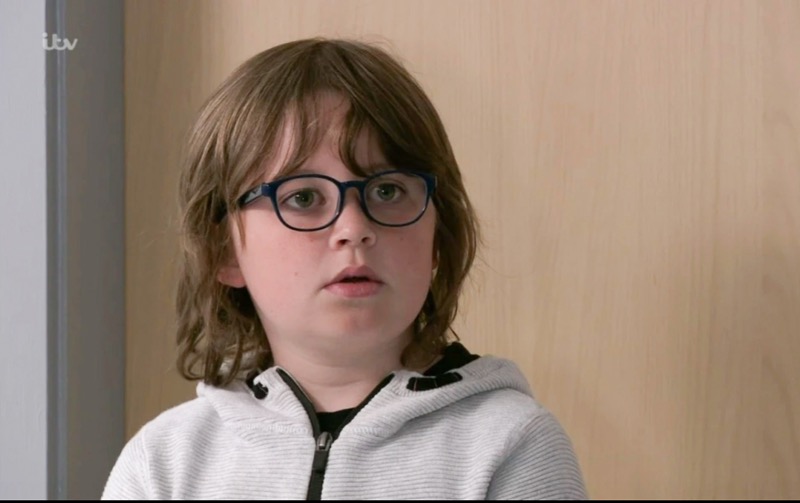 Coronation Street” spoilers have hinted at a festive Christmas season for Sam Blakeman’s family as the grieving child utters few words, after suffering from mutism triggered by Natasha’s death.

Sam Blakeman (Jude Riordan) has been worrying the people surrounding him for remaining to keep silent ever since her biological mother, Natasha (Rachel Leskovac) died in an untimely manner when drug lord Harvey Gaskell (Will Mellor) shot him in a mistaken identity.

Sam spoke his last words when Nick Tilsley (Ben Price) took the child to the funeral parlor in which Sam told his mom he regretted not making her feel his love towards her. As revealed by Sam’s memory note, he wrote how he wished his last words to Natasha had been different, leaving Nick extremely bothered.

However, Nick and her partner Leanne Battersby (Jane Danson) witnesses a miracle in upcoming episodes. On Boxing Day Sam finally exchanges conversation with his friend, Hope Stape (Isabella Flanagan) over the walkie-talkie.

Relief that Sam has finally broken his silence, Nick and Leanne lean in to listen more to the exchange. But what they did might tamper Sam’s recovery process as the child discovers their eavesdropping activity. Will Sam resort to being silent again? What will Nick and Leanne do to win back Sam’s heart?

The child wonder Jude Riordan has already bagged awards this year for his role in the ITV soap “Coronation Street” as young Sam Blakeman. Before this year comes to a close, Jude has received another achievement, the Best Performance Award in the “I Talk Telly Awards” 2021.

Smiling brightly while holding his award and with his dog by his side, the child posted the photo on Twitter and wrote in the caption: “I AM PROPER BUZZING about this! Thank you all so much for voting for me. What a year I’m having. Sam Blakeman rocks thank you for supporting me on the Cobbles!”

His Corrie costars including Tony Maudsley, who plays George Shuttleworth, praised the child star saying: “Jude!! You’re only missing the Oscar and the Grammy… but I suspect it won’t be long”

His fans asked the child about the number of awards he already received and Jude revealed the “I Talk Telly Award” is already his 4th.

“I suspect you will need a house for all those awards,” a fan teased.