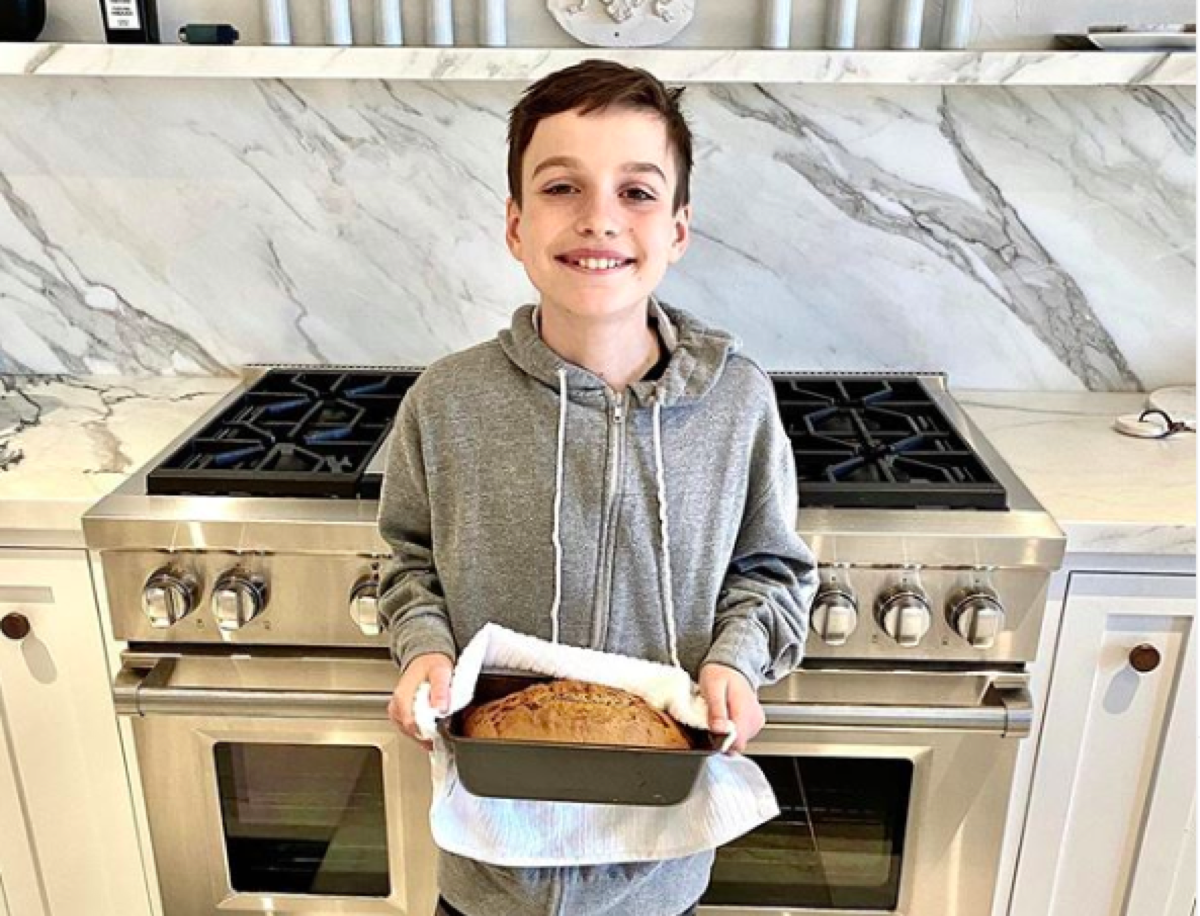 The Young and The Restless spoilers teases that actor Daniel Goddard’s son is a budding baker; he posted a photo of the proud young man bearing a fresh loaf of pumpkin bread recently on Instagram.

Daniel, an actor most recently seen on the CBS daytime drama “The Young And The Restless” talks about current health events and teaching eleven year old Sebastian to be independent. He commented next to the photo, “With the world going crazy, and panic and fear startling to run rife… all you need to do is teach ur kids to be smart, strong & independent, and… bake pumpkin bread! #coronavirus #menwhobake #besafe #nothingbutlove #yr #washyourhands.”

That is some very wise advice! If your grocery store is out of bread, flour, yeast, dry milk, a little sugar, strong arms to knead dough and a lot of patience will bring you a loaf of homemade bread! Oh, and a can of pumpkin leftover from Thanksgiving in this case! Sounds delicious!

Daniel Goddard was born in Sydney, Australia on August 28, 1971. He was majoring in finance when he went into acting. His first role was in the soap opera Home and Away in 1988. When he came to the USA, he did commercial modeling until he won the lead role, ‘Dar’ in BeastMaster in 1999. He also starred in a motion picture called A Man Called Rage, in 2002. He played Cane Ashby in the CBS daytime drama “The Young and The Restless” from 2007 to 2019.

With the world going crazy, and panic and fear startling to run rife… all you need to do is teach ur kids to be smart, strong & independent, and… bake pumpkin bread! #coronavirus #menwhobake #besafe #nothingbutlove #yr #washyourhands

His wife, Rachael Marcus worked as an Entertainment Publicist and Event Planner for 10 years, but now has her own successful design company called Paint/Design/Decor, Inc. Her murals, artwork and interior have been featured in Lifetime’s “Merge”, ABC’s “Extreme Makeover Home Edition”, and Sony Television’s Pat Croce “Movin In.”. They have two sons; Ford Martin Goddard, was born on February 6, 2006 and Sebastian William Goddard, was born on December 19, 2008.

He is, however probably best known for his role as Cane Ashby. In January 2007, Cane debuted as a bartender at “Indigo”, Neil Winters’ (Kristoff St. John) nightclub, remaining in the United States beyond the expiration of his visa, leaving him fearful of being deported. Thereafter, he became involved with Amber Moore (Adrienne Frantz), who first used him to make Adrian Korbel (Eyal Podell) jealous and later found out Cane was looking for his birth mother. He had been adopted by a woman named Violet Montgomery and raised by her brother, Langley Ashby, after her death in Canberra, Australia.

Amber was trying to find Phillip Chancellor III, Jill Abbott’s (Jess Walton) lost son, who was really switched at birth with another child by Katherine Chancellor (Jeanne Cooper). Amber realized that Cane might be Jill’s son and decided to marry him; they went to Las Vegas, became intoxicated and Amber tricked Cane into thinking they were married.  Amber’s suspicions of Cane being Jill’s son were proven true, and Cane shared a reunion with Jill, as well as prevented his deportation. Cane and Amber then moved into the Chancellor Estate and he began working for Katherine’s company.

Keep an eye out for the name Daniel Goddard in future television programs or made for television movies, and keep an eye on Celebrity Baby Laundry for the latest news, updates and developments!