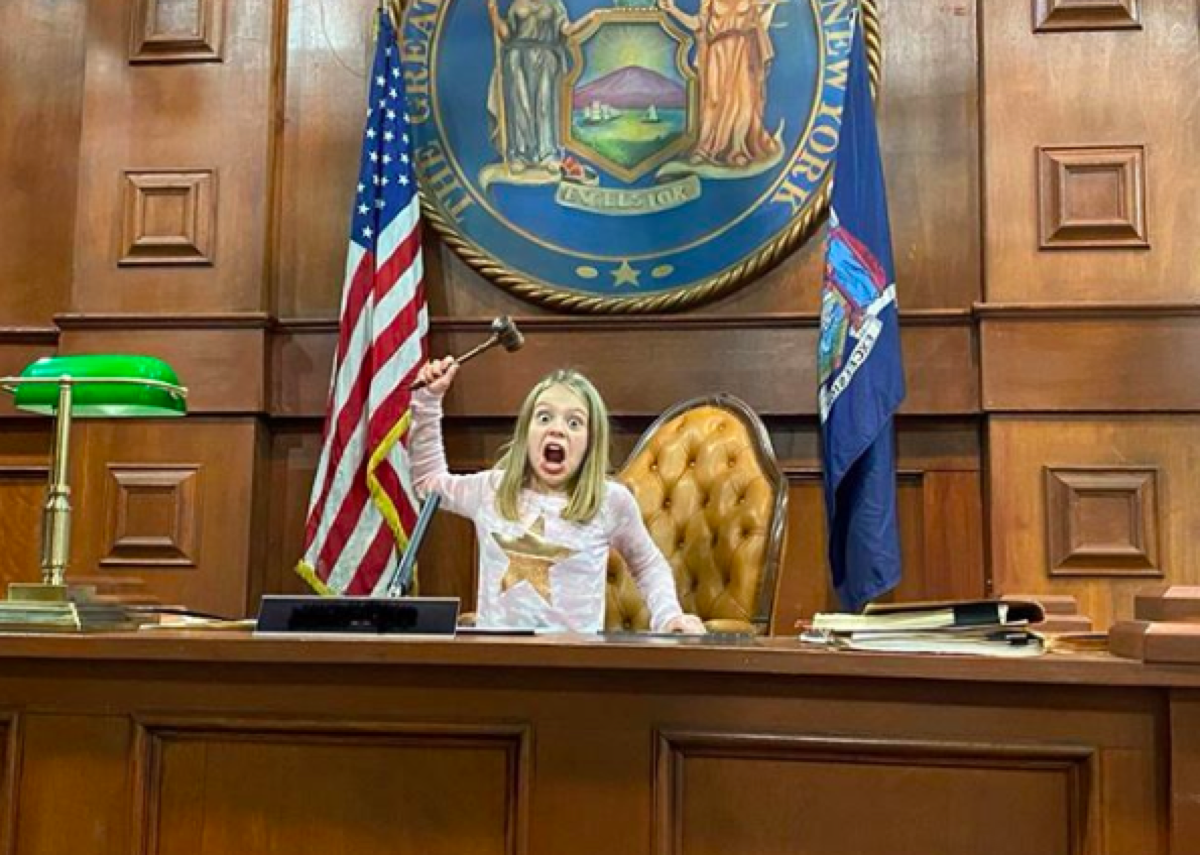 Scarlett was playing around on the courtroom set of the ABC daytime drama, General Hospital where she has appeared as Charlotte Cassadine since September 2016. She commented “Guilty for being awesome #GH fans! Thank you for being such loyal and awesome viewers!” She will certainly make a good “hanging judge” when she gets older, judging by that threatening little face!

Her character is the daughter of Valentin Cassadine, played by James Patrick Stuart, and Lulu Spencer, played by Emme Rylan and carried in vitro by Claudette Beaulieu, not currently on the show but played by Bree Williamson, and Charlotte’s grandparents on the daytime drama are Luke Spencer, played by Anthony Geary and Laura Collins, played by Genie Francis. She also has a half-brother, Rocco Falconeri, played by O’Neill Monahan.

Her Character On GH Also Has A Half-Brother, Rocco Falconeri

Technically, the two characters could be considered twins since they were both in-vitro babies and Lulu’s eggs came from the same batch. Scarlett is a favorite among her coworkers onset, with her tv father especially having posted pictures of the two together on his social media. There was a little controversy caused by the props department when she first came onboard the General Hospital canvas, caused by an apparent typo on a birth certificate which said Charlotte was born in 1996!

Guilty for being awesome #GH fans! Thank you for being such loyal and awesome viewers! #scarlettischarlotte #portcharles #generalhospital

A post shared by Scarlett Fernandez (@officialscarlettfernandez) on Mar 11, 2020 at 6:33am PDT

There was quite a bit of fan speculation on that one that she had been the long lost daughter of Nina Reeves, played by Cynthia Watros since Nina and Valentin were in the process of getting married for the first time back then.

More About Scarlett Fernandez And Her Current General Hospital Storyline

Young Scarlett has also played in a couple of other series in her very young career as an actress; she played in the 2016 Fox television series “Lethal Weapon” as Kate, and in the Showtime series “Shameless” as Jeni. She also has an older sister, Reagan Fernandez who is also an actress.

Scarlett’s most recent General Hospital storyline had her as the focus of a custody dispute; where her tv mother Lulu was trying to change the custody agreement she currently had with Charlotte’s birth father, Valentin. She mentioned fighting Valentin for full custody and had also threatened him with a restraining order to keep him away from Charlotte – which Charlotte overheard!

It looks like the storyline will have Charlotte becoming deeply disturbed and acting out; she had cut up a photo and had blamed her former stepmother Nina for it to her mother Lulu when she picked her up from an afternoon with Nina, who Charlotte normally adores. The little girl has undoubtedly felt the vitriol coming from her birth parents at each other, and Lulu is clearly using her daughter with Valentin as a pawn in a power struggle, while Nina watches helplessly because she is divorced from Valentin, and has no say in her custody. She also drew a pink mustache on a sketch of Ava Jerome, played by Maura West.

Check General Hospital on ABC Daytime to see Scarlett in action as Charlotte, and check Celebrity Baby Laundry frequently for all the latest news, updates and developments!