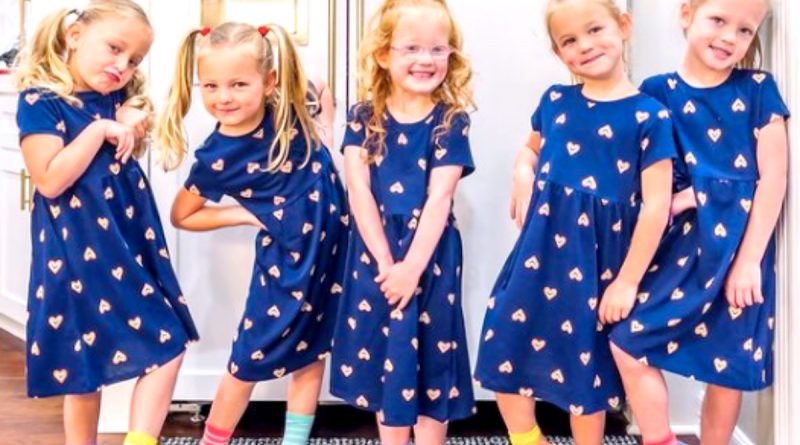 OutDaughtered fans know that occasionally, the Busby quints split up. Sometimes, it comes because Hazel isn’t that good at things that require balance. So, when the other kids went off to one camp last summer, she stayed behind. Nevertheless, her dad, Adam made it up to her. On other occasions, the kids get sick, and then they also get separated and miss out on events. Now that the quints were split up again, fans asked an oft-repeated question.

OutDaughtered Quints Split Up To Visit Nana And Papa

Last year, the Busby family went to Lake Charles in Louisiana as part of their summer vacation. Well, when the time came for the family to leave, Danielle told her TLC fans that Blayke and Hazel stayed behind. Of course, they don’t get stuck at home with just grandma snd grandpa when they stay, as they have cousins who live there as well. Photos that were shared on social media revealed that the girls seemed to really enjoy their time without their other four siblings around.

Last summer, the next OutDaughtered quints to go and stay with Nana and Papa were Riley and Ava. So, the twins shared different homes for a little while. Danielle said that each year, the kids split up to enjoy one-on-one time with their grandparents, and it seems like a great idea, fans agree. Well, 2022 rolled around and it’s time for the kids to do the same thing again. Only this year, TLC fans wondered about the quints who go away together this time.

Which OutDaughtered Quints Stay In Louisiana At the Moment?

On June 7, Danielle posted a photo of Riley and Olivia with their bags all packed to go and stay at Nana’s. In her caption, she said, “Summer Time means taking turns staying at Nana & Papas!” Then the reality TV star confirmed that the “first two to stay a week are Riley & Olivia 🤍,” adding how much she’ll “miss them.” However, she loves that it gives the girls a chance to “have their special time without everyone else! It seriously is one of our girls favorite things to do in the Summer.”

OutDaughtered fans recollected that when they were very young, Riley and Olivia used to fight like cats and dogs. So, so one TLC fan noted, “😍Too cute….I remember when Lulu & Riri were “enemies” and fought all the time. do you remember?❤️” Well, there was no answer to that question. Anyway, they possibly grew out of it. You might recall that Adam tweeted about the two girls back in 2017.

In his tweet, Adam Busby revealed that he caught the two quints giving each other a very sweet kiss. Hopefully, it stays that way now that the two girls get a bit older.

No Answer To Repeated Question

OutDaughtered fans used to get a lot of answers from Danielle Busby, but that seems to have tapered off in the last year or so. Numerous fans are very interested in finding out how they decided with of the kids to pair off with another. In fact, they asked the same question last year. But, they were not answered then, and no answer came this time, either. So for now, TLC fans can only guess that the kids might choose their own partner when they visit Nana and Papa.