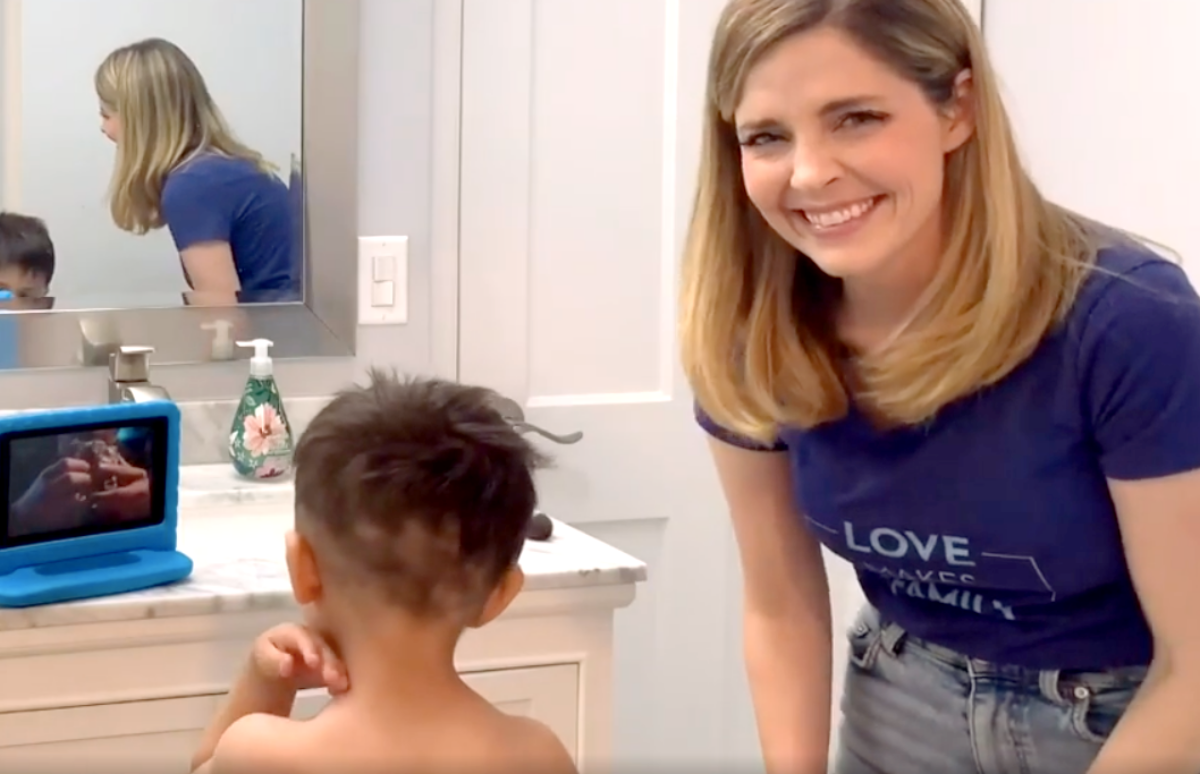 Days of Our Lives spoilers tease that Jen Lilley, who played Theresa Donovan on the NBC daytime drama Days of Our Lives, has tried doing what most parents have in the Covid-19, or coronavirus lockdown; she cut her little boy’s hair, and videoed it and shared on Instagram recently.

DOOL Spoilers: Kayden Is The Older Of The Set Of Brothers That She And Her Husband Are Adopting

Jen and husband Jason Wayne fostered two brothers, the oldest one of whom they have adopted and his little brother in the process of adopting. They adopted Kayden on June 19, 2019 and are in the process of adopting his brother, who for now they are calling “Baby J.” She commented, “So I did a thing…Kaydens Covid Hair Cut Gone Wrong Plus hear a sneak peak of my upcoming single, “Street Where You Live”. #covid #momfail #hilarious #diyhaircut Some fans were not aware that Jen is also a talented singer, if not such a talented hairstylist, at least according to her!

Also farther down in the comments thread a fan asked her if she would come back to Days of Our Lives if she were asked, and she answered “Definitely!” Jen and Jason had previously gone through a struggle trying to get the family courts to approve the adoption of Baby J, not wanting the two brothers to be separated.

Days of Our Lives Spoilers: More About Jen Lilley

The daughter of Vince Lilley, a judge, and Ellen Lilley, a director of marketing/event planner, Jen Lilley was born on August 4, 1984 in Roanoke, Virginia. She had wanted to become a singer since childhood and, in 2001, she garnered the National Educators award in Guatemala by giving multiple concerts for underprivileged Guatemalan youth. In the late summer of 2007, she moved to Los Angeles to pursue acting.

Lilley devotes her spare time to charities focusing on children, homelessness, and the world water crisis. She married Jason Wayne May 26, 2007. She is a celebrity ambassador for ChildHelp, who she and her husband Jason foster care children through. In 2011, Lilley had a supporting role in director Michel Hazanavicius’s silent movie The Artist, and she also appeared as Monie in the iCarly TV movie, “iParty with Victorious”. In the fall of 2011, Lilley temporarily took over the role of Maxie Jones, as a temporary recast for Kirsten Storms on General Hospital while she was on medical leave for endometriosis.

DOOL Spoilers: She Made Her On-Screen Debut On September 28, 2011

In June 2016, she confirmed she was exiting the soap due to the demanding filming schedule hindering her ability to pursue other commitments and opportunities. However, she reprised her portrayal as Theresa in May–July 2018. In November 2016, Lilley appeared in a film for the Hallmark Channel titled A Dash of Love, and more recently in a Hallmark movie called “Yes I Do.”

Watch for Jen Lilley’s Hallmark Channel and Hallmark Mysteries and Movies Channel made-for-tv movies, and possibly a future announcement of a Days Of Our Lives appearance or two, and keep checking Celebrity Baby Laundry frequently for all the latest news, updates and developments!

Bold and the Beautiful Spoilers: Heather Tom Films Hilarious Instagram Video – Us Vs Them, A Quarantined Mom’s Rebellion Against Yoga Pants!