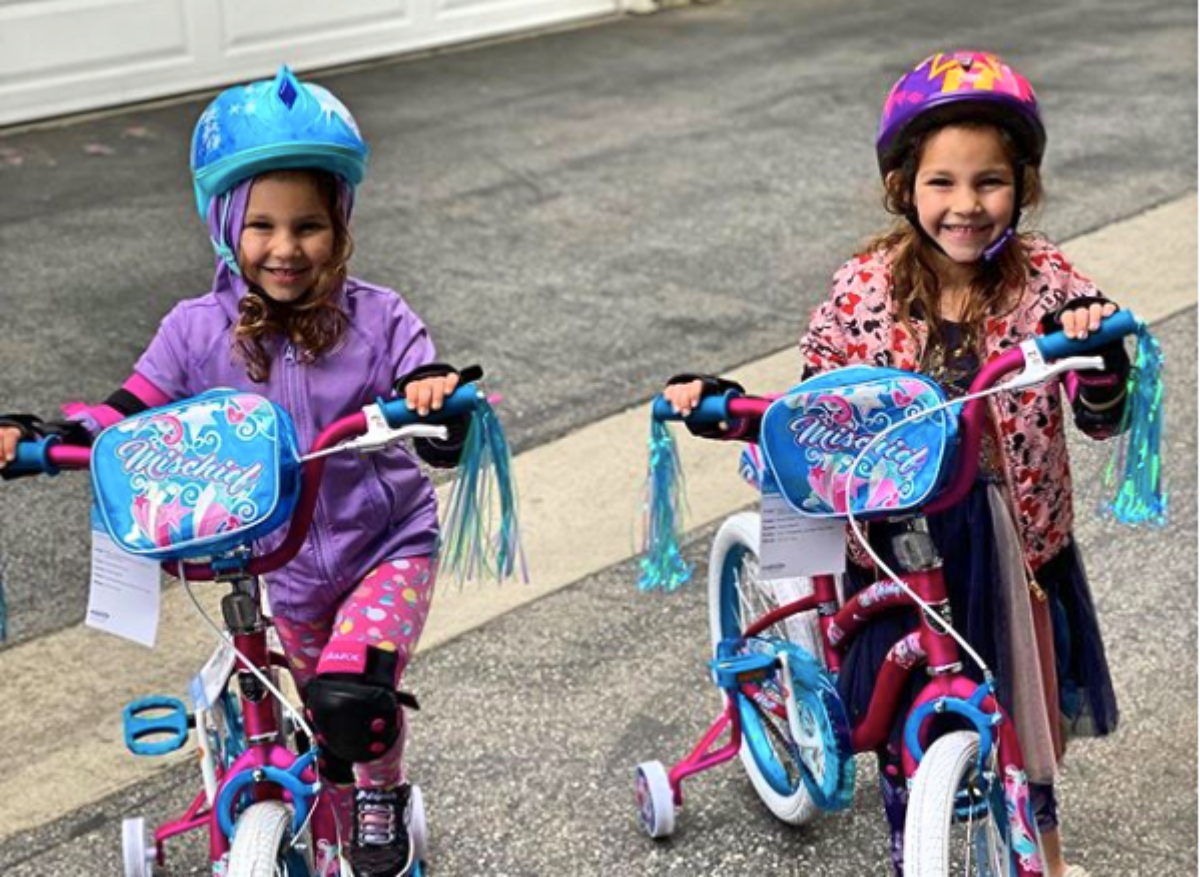 General Hospital spoilers tease that Ava and Grace Scarola, the five year old twins who play General Hospital’s Avery Corinthos-Jerome, are learning to ride bikes! A cute photo of the two with their bikes was posted recently on Instagram.

It looks like the girls may also have protective knee and elbow pads on, but it is difficult to tell from the way the shot was taken to be sure. They also have something black on their hands as well but they could be wearing fingerless gloves, as they have jackets on and it could be a chilly day.

General Hospital viewers will recall that Ava And Grace debuted in 2014 as Avery Jerome-Corinthos, after having been conceived during a hot night of crypt sex by her mother Ava Jerome (Maura West) and Sonny Corinthos (Maurice Benard) on top of the recently murdered AJ Quartermaine’s (Sean Kanan) crypt!

Her birth and early life were just as dramatic as her conception; Nina Reeves (then Michelle Stafford, now Cynthia Watros) who was still upset with Ava for stealing her first husband, Silas Clay (Michael Easton) wanted revenge on Ava and she induced labor, and then kidnapped the newborn and fled to Canada! Her close friend Franco Baldwin (Roger Howarth) who had also been involved with Ava romantically at one time, twenty-five or so years ago was lied to by Ava, and told he was her older daughter Kiki Jerome’s (then Kristen Alderson, most recently Hayley Erin) father.

GH Spoilers: Her Character’s Birth And Early Life Were Just As Dramatic As Her Conception On The Show

Franco, who by this time had befriended Nina and they were somewhat romantically involved, went with Nina and baby Avery to Canada, wanting to make sure that Nina didn’t hurt Avery, but also to make sure that no one would hurt Nina, because at that time Ava and her brother, Julian Jerome (William DeVry) were still somewhat involved with the mob and Franco feared retaliation against Nina for stealing the baby.

The police eventually catch up to them and later, Nina is seen in court with Franco. Alexis Davis (Nancy Lee Grahn) comes to represent her. Nina asks Alexis to represent Franco also, but Alexis refuses. Nina later pleads not guilty due to reason of insanity while Franco pleads guilty.

The judge decides that Nina should be sent to Shadybrook Sanitarium while Franco should be sent to Pentonville Penitentiary, but Franco takes a dose of LSD so that he will be considered insane and is put in Shadybrook also, where he protects Nina from his mother, Heather Webber (Robin Mattson) who did not approve of Nina as someone Franco should be involved with. Avery, meanwhile, had been returned to her mother Ava.

Stay tuned to GH, and keep checking Celebrity Baby Laundry frequently for all the latest news, updates and developments!