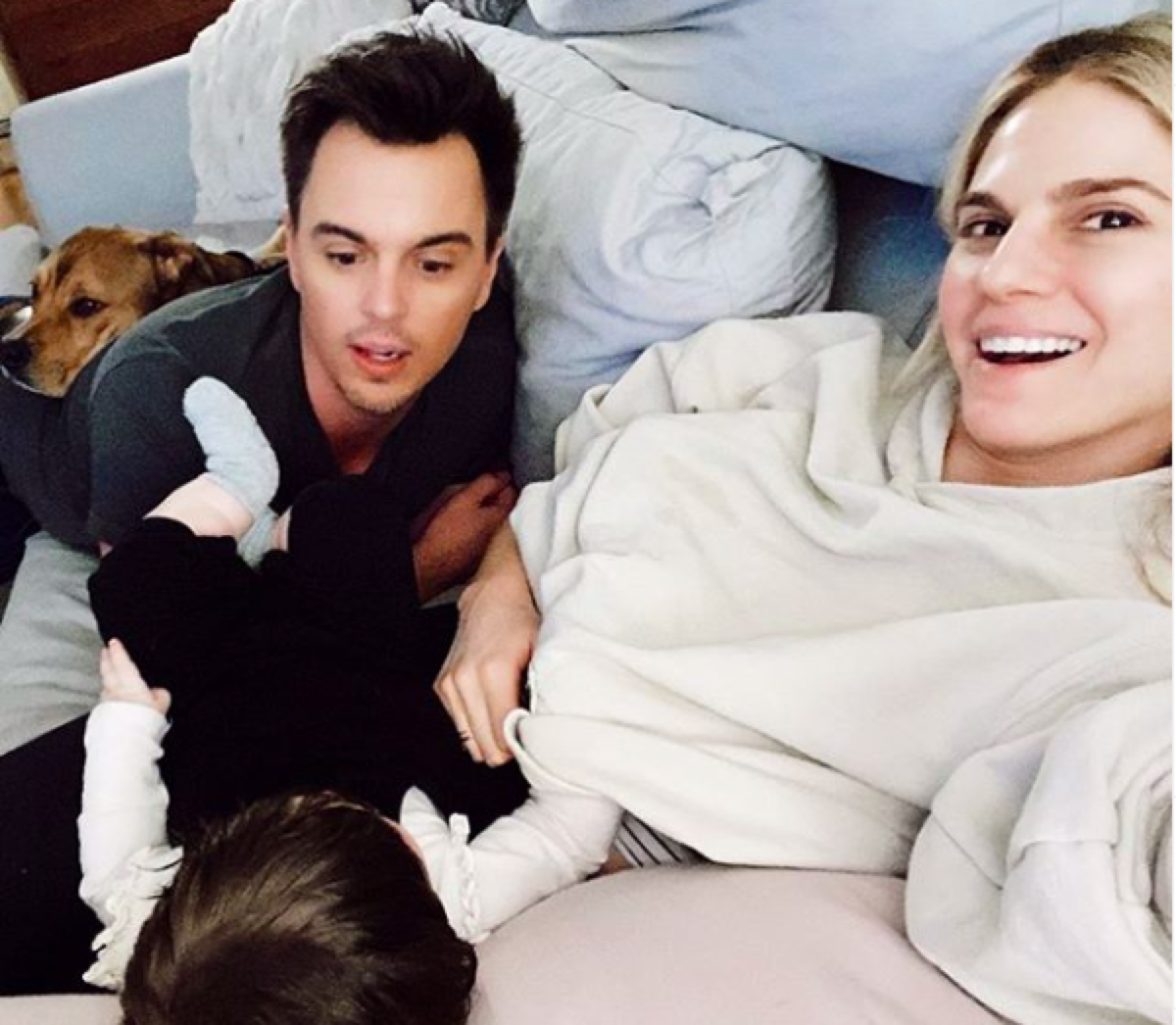 The Bold and The Beautiful spoilers teases that B&B actors, Kelly Kruger Brooks and Darin Brooks have a special bedtime routine for their daughter Everleigh Brooks!

It looked like maybe it was tickle time in the bed as Kelly, Darin and Everleigh were surrounded by pillows and even the family dog managed to squeeze in. Kelly referred to her skin care routine as she posted “Nighttime routine -Testing out the new @biossance lactic acid nighttime treatment that apparently shows dramatic results over night. Will report back. I’m a huge fan of the line for everyone looking for clean beauty that WORKS!! #multitasking #skincare #nightimeskincare #Biossance”.

However, it looked like they were in a large bed by the looks of all the pillows evident, although something behind Darin and the doggie could have been a couch arm as well. In a different Instagram post earlier, she talks about the dog, named “Chanceypants Brooks” as follows; “Adopting @chanceypantsbrooks from @thelabellefoundation was a big highlight of 2019. He has brought so much to our lives – Are u a dog person or cat? (Or both) #adoptdontshop #rescuedogsofinstagram #2019”. Everleigh Jolie Brooks was born on September 22, 2019, making her now almost four months old.

Both parents are actors, both appearing on the NBC daytime drama “The Bold and The Beautiful”, he as Wyatt Spencer and she as a recurring character named Eva. She also appeared in “The Bold and The Beautiful’s” sister daytime drama, “The Young and The Restless” as Mackenzie Browning from February 2002 to July 2003. Kelly was born and raised in Montreal, Quebec, and speaks French fluently; and at 17, was discovered by Elite Models while visiting her family in Los Angeles.

She worked with multiple teen magazines, Macy’s, Sebastian Hair and others. After working as a model, she began pursuing her real passion of acting. Kelly landed a lead role in the feature film Vampire Clan. Kruger also appeared in several movies, as well as one episode each of the TV series Knight Rider and Blue Mountain State. Kelly has appeared on Hit shows such as Entourage, Bones, Criminal Minds, Castle, and Rizzoli & Isles. Darin was born and raised in Honolulu, Hawaii.

Brooks moved to Frisco, Texas in 1990 where he graduated from Frisco High School in 2002. He is of Polish descent. Brooks started his acting career with the theater program at his high school. He played Rapunzel’s prince in his high school’s production of Into the Woods. He later enrolled in acting classes, began modeling, and worked as an extra in films.

He was discovered by casting director Kathy Henderson.When Brooks moved to Los Angeles, California, he called Henderson immediately, took acting classes at the renowned Ivana Chubbuck Studios,and got an agent. Two years after the move, he was portraying Max Brady on the NBC drama series Days of Our Lives. He later starred as Alex Moran on the Spike TV series Blue Mountain State. In 2010, Brooks starred as Mr. Blake Owens on the web series Miss Behave. In June 2013, Brooks began playing Wyatt Spencer on the CBS soap opera The Bold and the Beautiful.

Look for Darin and Kelly on CBS’s The Bold and The Beautiful, and check Celebrity Baby Laundry frequently for all the latest news, updates and developments!

10 Things To Do With The Kids In Romania