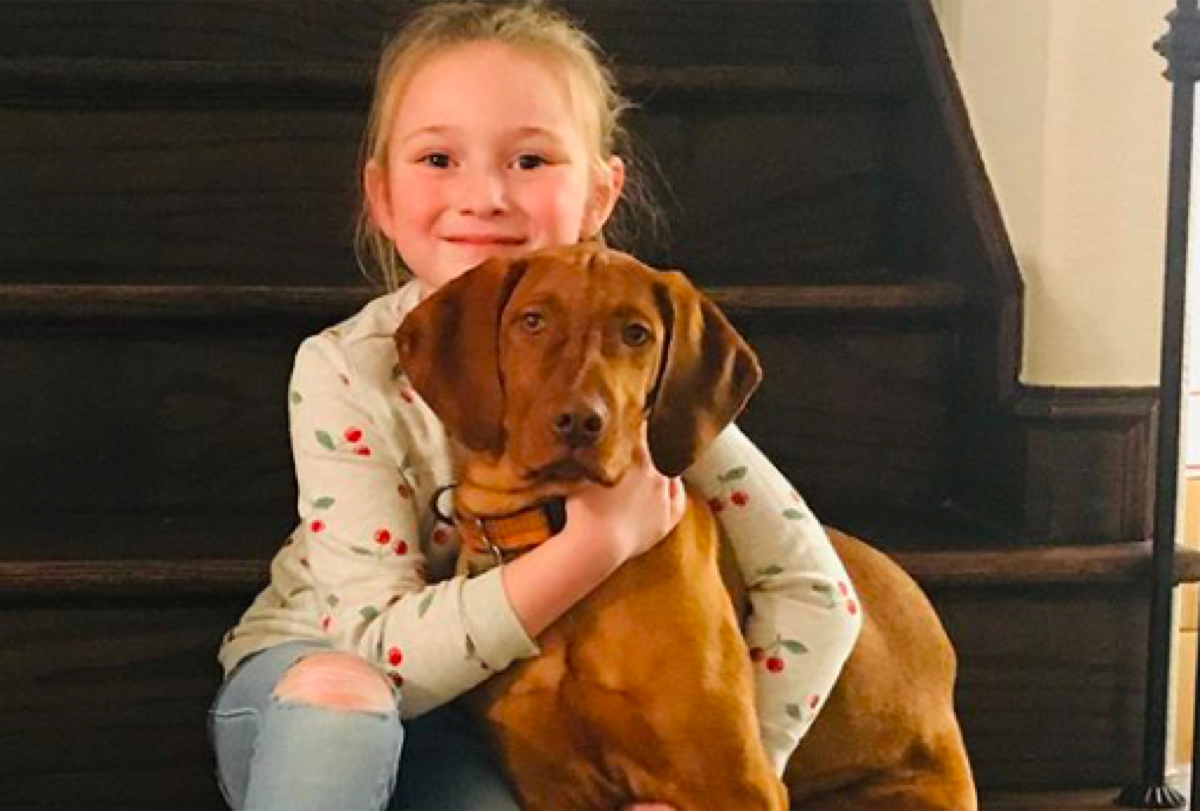 Days Of Our Lives spoilers teases that DOOL actress Martha Madison, who plays Belle Black Brady on the NBC daytime drama has two favorite pups; one is a brown Visla puppy and the other is her daughter, Charley Elizabeth Gilbert!

DOOL Spoilers: Charley Elizabeth Gilbert And The Puppy Sit On The Stairs

Charley, who will be seven years old in November, and the puppy, which is almost as big as she is, sit on the stairs in the photo that Martha posted on her Instagram recently, and posted simply, “My two pups. #woof #babypresident #viszla #viszlasofinstagram #winston” The pup’s name appears to be Winston.

Martha Madison was born in Newport News, Virginia but was raised in Houston, Texas. She attended Cypress Creek High School, and graduated from Texas A&M University in 1999 with a degree in psychology, where she was also the Captain of the Texas A&M Dance Team. In 1999, she moved to New York City where she attended the American Musical and Dramatic Academy. She also danced with the Peyari Dance Project for two years. Unfortunately, after several injuries, she was forced to retire from dance.

In 2008, Madison appeared in the primetime drama “Without a Trace” in the episode “Rewind” and also in the “Criminal Minds” episode “The Big Wheel” in 2009. From 2010 to 2014, Madison appeared on the soap opera web series “The Bay” as Marly Nelson-Foster; and in June 2011, Madison temporarily took over the role as Elizabeth Webber on the ABC daytime drama General Hospital, appearing from June 8–20, 2011.

Martha and General Hospital’s Lilly Melgar currently co-host “TradioV.com’s SoapBox with Lilly and Martha”, which airs live every Thursday at 2pm pacific on tradiov.com. In 2015, Madison also began starring as Miranda Winterthorne in the soap opera web series “Winterthorne”. In addition, Madison had a small role in the film “Kate & Leopold” in 2001. She then moved to Los Angeles in 2003 to pursue a career in film/television, and briefly appeared on the NBC daytime drama “Passions” in 2004.

DOOL Spoilers: Madison Played The Role Of Belle Black On Days Our Lives

Madison next played the role of Belle Black on the NBC daytime drama “Days of Our Lives” from 2004 to 2008, a role in which she still appears on a recurring basis. Also, for a period of time in 2007, she appeared on The Tyra Banks Show to help model/host Tyra Banks through “soap opera school.”

Madison announced on her official forum in 2006 that she had become engaged to her boyfriend, restaurateur A.J. Gilbert, the owner of Luna Park in San Francisco, Los Angeles and New York, on July 29, 2006, when he took her to the Hotel Del Coronado in San Diego for her birthday. Madison and Gilbert married on August 25, 2007.In April 2013, Madison announced that she was pregnant with her first child. On November 3, 2013, she gave birth to her daughter Charley Elizabeth Gilbert.

Watch for Martha’s appearances on Days of Our Lives to see her, and check Celebrity Baby Laundry frequently for all the latest news, updates and developments!