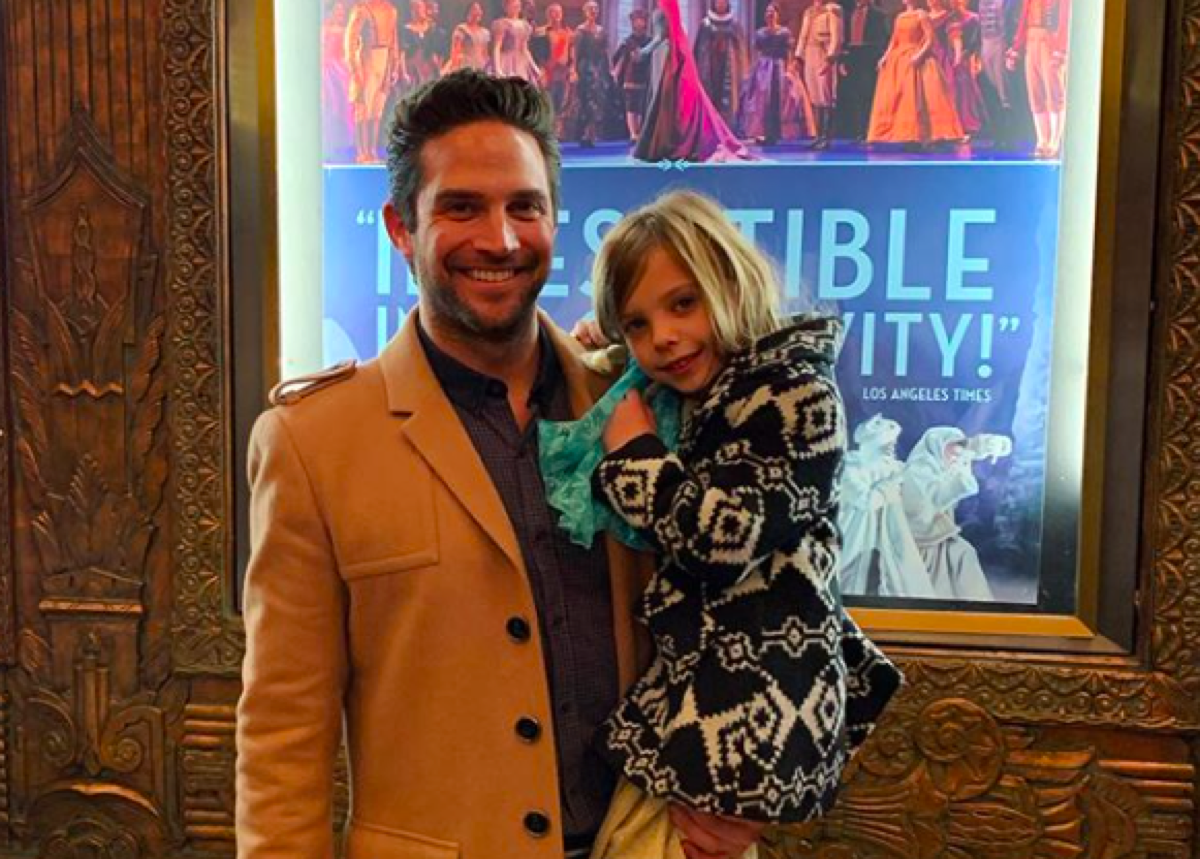 Days of Our Lives’ Spoilers reveal that actor Brandon Barash (Stefan DiMera) took his and General Hospital’ Kirsten Storms’ adorable daughter Harper Rose Barash to “Frozen – The Musical” on the evening of December 30!

‘DOOL’ Spoilers: Brandon Barash Posted A Photo Of Himself Holding His Daughter Inside The Venue

The proud papa posted a photo of himself holding Harper Rose in front of a poster of the show inside the Hollywood Pantages Theatre on his Instagram account and wrote: “Last night — Frozen the Musical @hollywoodpantagestheatre!! The most magical part for me was watching it through Harper’s eyes.

This was her first musical, and watching her marvel at the production happening live before her was/is one of my favorite memories as a parent. I also got talked into spending $60 on a “limited edition” Elsa doll. Sucker.” Brandon’s statement about calling himself a “sucker” for buying the $60 limited edition Elsa doll for Harper seems to indicate that the daddy is more spoiled than the daughter!

‘Days Of Our Lives’ Spoilers: Mommy, Daddy, And Daughter Have All Acted In Soap Operas

Harper’s mommy, Kirsten Storms, her daddy, Brandon Barash and even little Harper Rose herself have all acted in soap operas, and Brandon in several primetime television programs as well. Harper Rose played an infant “Georgie Spinelli” on the ABC soap opera “General Hospital” to her mother, Kirsten’s character, “Maxie Jones”. Kirsten herself started acting as a teenager, most notably as “Belle Black” in the NBC soap opera “Days of Our Lives”.

Last night — Frozen the Musical @hollywoodpantagestheatre!! The most magical part for me was watching it through Harper’s eyes. This was her first musical, and watching her marvel at the production happening live before her was/is one of my favorite memories as a parent. I also got talked into spending $60 on a “limited edition” Elsa doll. Sucker.

Brandon has been on both “General Hospital” and “Days of Our Lives” as “Johnny Zacchara” in “General Hospital” and as “Stefan O. DiMera” in “Days of Our Lives”. The two divorced co-parents do a marvelous job with Harper, she has a smile on her face in every photo that both Brandon and Kirsten post on their Instagram and other social media accounts.

‘DOOL’ Spoilers: “Frozen The Musical” Is Based On The Disney Hit Movie “Frozen”

Of course, “Frozen The Musical” is based on the Disney hit movie “Frozen”, which is a 2013 American 3D computer-animated musical fantasy film produced by Walt Disney Animation Studios and released by Walt Disney Pictures. The 53rd Disney animated feature film, it is inspired by Hans Christian Andersen’s fairy tale “The Snow Queen”.

It tells the story of a fearless princess who sets off on a journey alongside a rugged iceman, his loyal reindeer, and a naive snowman to find her estranged sister, whose icy powers have inadvertently trapped their kingdom in eternal winter. There is now also a “Frozen 2” sequel currently in movie theatres.

Check out Kirsten on ABC’s General Hospital and watch for Brandon’s return to NBC’s Days Of Our Lives, and check Celebrity Baby Laundry for the latest stories on Harper Rose Barash and other celebrity cuties!

Best Museums In Canada For Kids