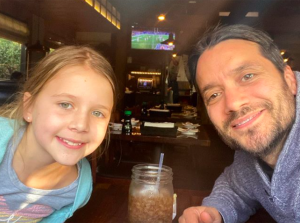 Dominic Zamprogna And His Wife Linda Zamprogna Have Three Daughters

Dominic and his wife Linda have three daughters, of which Anbilliene is the oldest, born on October 19, 2010. This makes her nine years old, and she has two little sisters, Eliana, born on December 30, 2012 and Adeline Pauline, who was born on May 17, 2015.

One can certainly tell that Dominic is a family man; his Instagram account is full of pictures of his family, including his three daughters. Many are photos of the three girls playing together, and there are quite a few family photos on vacation at different places as well.

Dominic has most recently acted in the Canadian television series “Tin Star” playing Estuardo, who appears to be a supporting character since he was only in four episodes in 2019. He played Detective Dante Falconeri on General Hospital from 2009 to 2019, making ten years as the popular character, married to Lulu Falconeri, (Emme Rylan) who has three children of her own, Levi, Jackson, and Dakota. You can read more about Emme and her little ones here on Celebrity Baby Laundry as well.

In addition to appearing in “Tin Star” and “General Hospital”, Dominic has also appeared in the television series “Battlestar Galactica”, “Stargate Universe”, “Smallville”, “The L Word”, “Flash Gordon”, “Battlestar Galactica: The Resistance” “Blade”, and “Edgemont”. His exit storyline on “General Hospital” was a dramatic one; the WSB, a spy organization, had recruited Dante, a police detective, to take down a drug kingpin named Raj Patel (Noshir Dalal), who had previously kidnapped his wife, Lulu.

Dante jumped at the chance to avenge Lulu’s kidnapping and left with little notice to Lulu and their children, Rocco Falconeri (O’Neill Monahan) and Charlotte Cassadine (Scarlett Fernandez) with whom Lulu shares custody with Charlotte’s birth father, Valentin Cassadine (James Patrick Stuart). Dante was gone on the mission for months, and then the WSB lost track of him, having “gone rogue” as they put it.

Date with my sweet Anbilliene

Dante’s own father, Sonny Corinthos (Maurice Benard) and a WSB agent on the verge of retirement, Robert Scorpio) Tristan Rogers) tracked Dante to Turkey, where Sonny helped Dante escape and come back home, but Dante developed PTSD and now has divorced Lulu, fearing he would never be safe for his wife and family to be around again.

Check out “Tin Star” or follow Dominic Zamprogna on your social media if you want to learn more about Dom, and keep checking Celebrity Baby Laundry as well for more articles on Dominic and his adorable little girls! For any other soap opera and entertainment news, please visit Daily Soap Dish.

Stress-Free Tips for Traveling with Kids