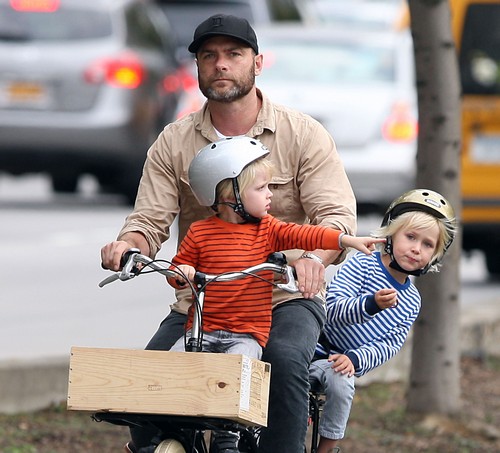 ‘The Butler’ actor Liev Schreiber, 44,was playing Mr. Mom and had a day out with his sons Alexander,5, and Samuel, 4, out for a bike ride on a bicycle build for three in New York City, New York on September 29, 2012.

Samuel (Sammy) rode up front and helped steer while Alexander (Sasha) enjoyed the cruise from the back.  Mommy Naomi Watts decided not to join her men.  It was Naomi’s birthday on Thursday so maybe her men were giving her some time to relax or maybe they were heading out to buy a present for her!

The boys wore their safety helmets while dad Liev decided to don his baseball cap. Dressed casually in jeans and a cotton shirt Liev looked relaxed having a fun day with his adorable boys.

Liev and Naomi have been in a relationship since 2005 and Naomi confirmed in an interview in late January 2009 that Schreiber had in fact given her a ring (which she was not wearing at the time) but that neither of them wanted to rush into marriage.

Naomi has said they would consider having a third child if they could guarantee it would be a girl.