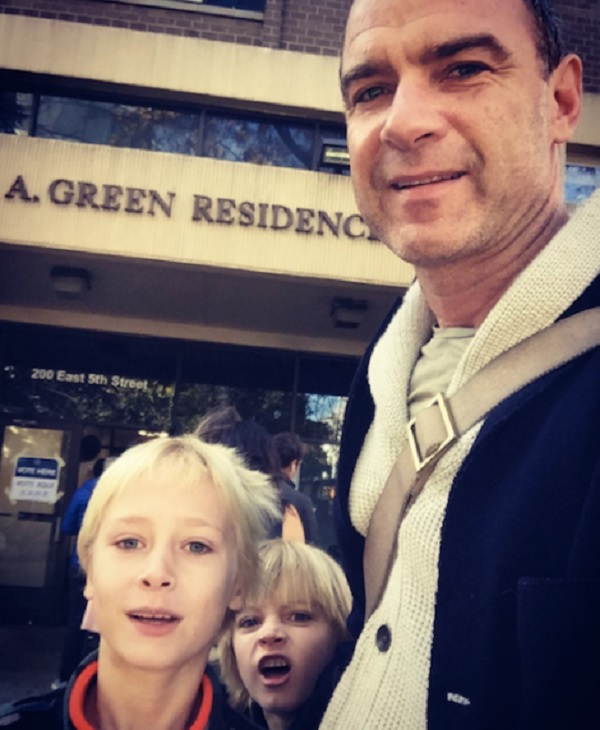 Ray Donovan star Liev Schreiber took to Instagram this week and posted an Election Day selfie with his two sons,  9 year old Sasha and 7 year old Kai.  Like many celebs and members of Hollywood’s elite, Liev Schreiber used his star power to get fans involved in the election and vote, and it looks like he has been teaching Sasha and Kai about current events as well.

The Ray Donovan actor and his long time partner Naomi Watts, Sasha and Kai’s mother, made a surprising announcement earlier this year and revealed that they had decided to split.  Liev and Naomi shared a public statement about their separation and asked that fans respected their privacy for the sake of their kids.  In their statement the couple added, “It is with great love, respect, and friendship in our hearts that we look forward to raising our children together and exploring this new phase of our relationship.”

Regardless of what is going on between Watts and Schreiber, it’s great to see that both parents seem to be spending time with the boys and aren’t letting their separation get in the way of co-parenting.

Showtime recently renewed Ray Donovan for Season 5, it’s set to premiere next summer on Showtime.  However, rumors on the internet are indicating that this will be Liev Schreiber’s final season on the Showtime drama as a Hollywood “fixer.”  It’s unclear yet whether they will wrap the show up, or try to continue without the iconic Ray Donovan.  Seeing as how the show itself is named after Liev’s character, it’s hard to imagine the show going on without him.