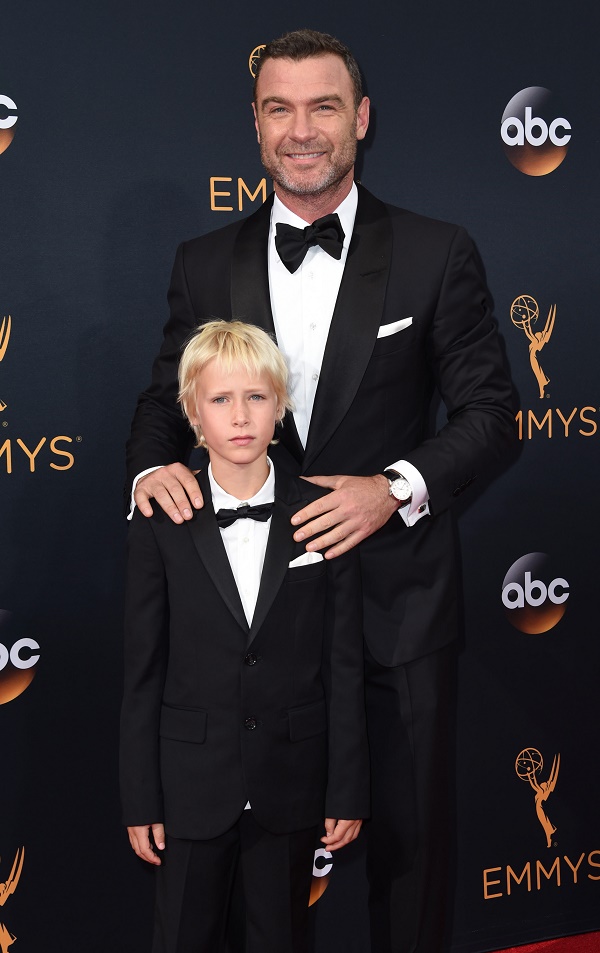 ‘Ray Donovan’ star Liev Schreiber attended the star-studded Emmy’s on Sunday September 18 in Los Angeles, California – and he had a handsome date!  Liev arrived to walk the red carpet with his adorable son Sasha [Alexander Pete Schreiber], and the father and son duo dazzled in their tuxedos.  It’s not too often that we see children at the Emmy’s, but Sasha was on his best behavior and acted like a little gentleman.

Liev Schreiber and Naomi Watts announced the birth of their son Alexander, who is knows as Sasha to his friends and family, in 2007.  On July 25 2016, Sasha turned  years old, his mom Naomi shared a sweet birthday message for her son on Instagram to commemorate the big day.  Sasha also has a little brother, Samuel Kai Schreiber, Samuel was born in 2008 and will be turning  years old this December.

Ironically, while Liev and his handsome son were walking the red carpet at the Emmy’s, the Season 4 finale of Liev’s popular drama ‘Ray Donovan’ was airing on Showtime.  Liev’s run on the series has been a huge success, and Showtime has already renewed it for a fifth season.  The drama features Liev as the lead, Ray Donovan, a Hollywood fixer who takes care of the “problems” of Hollywood’s rich and famous.

Sasha Schreiber looked absolutely adorable at the 201 Emmy Awards, and he is a spitting image of his handsome father Liev.  Kudos to Naomi Watts and Liev for raising such a little gentleman, he certainly knew how to conduct himself at a nearly all-adult event.