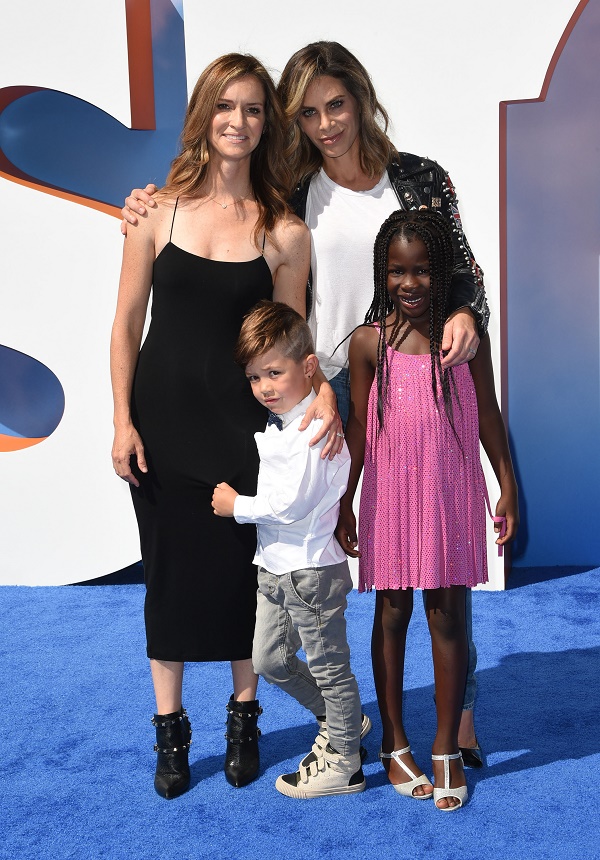 We have been counting down the days to the release of the super cute new animated movie ‘Storks,’ and apparently so has Jillian Micheals and her family.  The ‘Storks’ premiere party was held on Saturday September 17, 2016 in Los Angeles, California  at the Regency Village Theatre – and it was a star-studded event.  Among the famous faces and cast members walking the family-friendly red carpet was Jillian Micheals and her adorable daughter Lukensia.  Along with her girlfriend Heidi and son Phoenix.

Jillian and Lukensia stopped and posed for photos, Jillian was rocking a decorated leather jacket and Lukensia looked sweet as could be in a pink sequinned dress.  The youngster was all smiles, and appeared pretty excited to check out the new film.

‘Storks’ has been receiving rave reviews, and its such a fresh and fun new twist on a classic storytale theme.  We all have heard the old wives’ tale that storks deliver babies, obviously there is zero truth to it, but it’s always a great way to explain the details of pregnancy to a curious youngster.  The fun new animated film is all about the ‘Storks,’ only they have turned their baby delivery skills in to a world-wide business and are delivering packages.  Two trouble-making storks wind up having to deliver a baby, and she is a handful.

The star-studded cast includes voices by: Andy Samberg, Katie Crowne, Kelsey Grammer, Jennifer Aniston, and Jordan Peele.  And, you can check out the hilarious new film in theaters now, just like Jillian Michaels and Lukensia did!