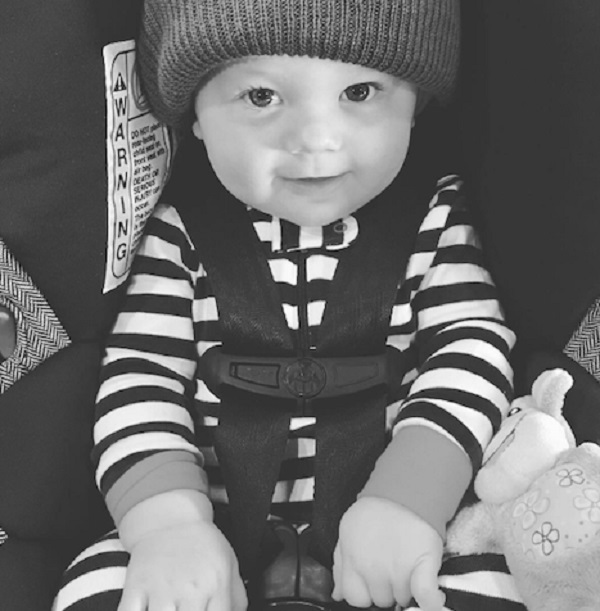 One Direction singer Louis Tomlinson’s baby boy Freddie is growing up so fast!  It seems like just yesterday Louis Tomlinson confirmed that he had a baby on the way with Los Angeles stylist Briana Jungwirth.  Louis and Briana’s relationship has always been a bit of a mystery, both Jungwirth and Tomlinson made it very clear when she was pregnant that they were “just friends.”  Now, Briana and Louis are not even friends – and are embroiled in a nasty custody battle.

Louis Tomlinson’s son Freddie is already 7 months old, the handsome little guy, who is a spitting image of his father, was born on January 22 2016.  Louis has been very private about his son, and his custody battle issues with Briana.  In fact, he is even trying to take legal action to stop Briana from sharing so many photos of their baby on social media.  In this new sweet snapshot of Freddie, the happy baby is smiling for the camera in his carseat.

Since Freddie Tomlinson’s birth, news hit the internet that the infant was diagnosed with Deformational Plagiocephaly, a common condition among infants.  Apparently, Freddie’s skull is extremely soft, and can be flat in places from sleeping on one side.  While the condition sounds super scary and serious, it’s actually pretty common.  Briana has received a lot of flack on social media from One Direction fans about Freddie’s appearance and whether he is or is not wearing a helmet that is sometimes necessary with infants with that condition.  It’s no wonder Louis doesn’t want his baby growing up in the spotlight, internet trolls can be so cruel!