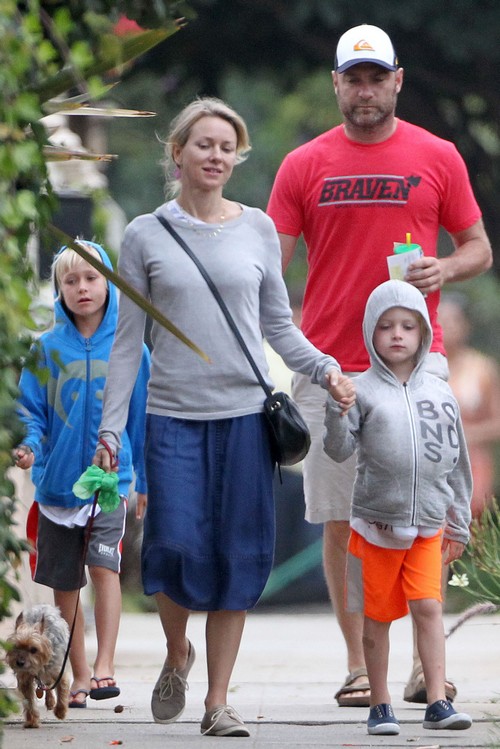 Naomi Watts and Liev Schreiber are one of those couples that usually manage to fly below the radar. When we see them they almost always have their two sons in tow and this past weekend was no different. The couple was spotted out and about in Brentwood not only with their boys, Alexander, 8, and Samuel, 7, but also walking the family pooch.

The family recently returned from a vacation in Cabo San Lucas, Mexico and seemed to still be basking in the togetherness. Naomi was make up free and in a denim skirt for a change and let me tell you, we should all look as radiant and well rested as she does here. Liev is always a bit rough around the edges when left to his own devices and I think that’s exactly how must of us like him. The stubble and bulging muscles are what make him so hot, right ladies?

It’s a good thing that Naomi had a bit of a breather because she is about to nose dive into a heavy work schedule when she takes on the role of Evelyn, leader of the Factioness on the Insurgent movie set. She has signed on that dotted line to star in the final three movies of the Divergent franchise which is based on Veronica Roth’s best selling book series.

Naomi is hardly a stranger to the gym and she recently admitted to being kind of addicted to exercise. She does 60-minute cardio sessions 7 days a week. That’s the kind of training that probably made her a front-runner for the role in Insurgent, don’t you think? Don’t you just love how close knit Naomi and Liev’s family appears to be? Tell us your thoughts in the comments below!

Gwen Stefani Enjoys a Beach Day With Her Boys