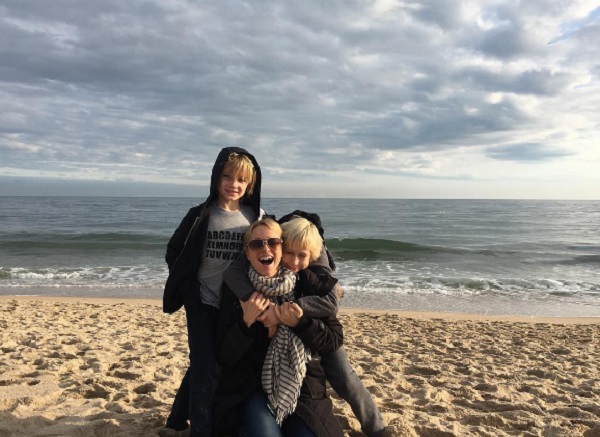 Proud mom Naomi Watts shared a beautiful photo over the holiday weekend, posing with her sons Sasha and Kai.  Watts and her family hit the beach, and although it looks like it was a little cold to go for a dip, the actress and her two sons appeared to be having a blast.  Naomi got in to the Thanksgiving spirit and captioned the sweet snapshot, “Thankful and grateful.”

We seriously can’t believe how fast Naomi Watts and Liev Schreiber’s boys are growing up!  It seems like just yesterday Naomi was walking the red carpet with a baby bump.  Alexander “Sasha” Pete turned 9 years old in July, and his little brother Samuel Kai will be turning 8 years old next month!

Naomi Watts and Liev Schreiber have been in the news a lot this year because of their break-up.  Although it has always been a mystery whether or not the couple ever married, they split this year after being in a relationship for over a decade.  The couple released a statement confirming their break-up, stating that it was amicable, and their main focus from here on out would be co-parenting their sons.

Both Naomi and Liev still seem to be huge parts of their kids’ lives, and judging from their happy faces on social media, Sasha and Kai haven’t been too negatively affected by their parents’ break-up.

Getting it Done! #vote http://tidal.com/us/getoutthevote

Watts opened up about her split in a recent interview with the Daily Telegraph and explained, “I feel, whether you’re famous or not, transitions are scary for anybody. I feel like change is always scary, but that’s only because transition for anyone is new and you wonder how things are going to go.”

‘Dancing With The Stars’ Allison Holker’s Son Maddox Is One Cute Turkey!