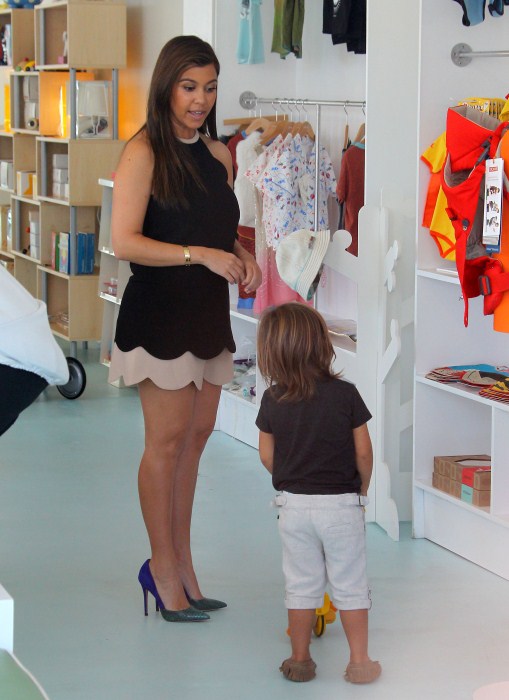 Kourtney Kardashian took her son Mason Disick shopping in Miami Florida last Friday. The shopping trip was captured by the rolling cameras of the Kardashian hit show Keeping Up With The Kardashians and the footage of it will air at some time in the near future.

Kourtney has been working out incredibly hard recently as she attempts to shed those nagging extra pounds that come as a result of pregnancy. We saw her just last week as she was pouring sweat doing exercises with friends on a Florida beach. The eldest of the Kardashian sisterhood relocated along with boyfriend Scott Disick to Miami in order to film for the show Kim and Kourtney Take Miami. Kourtney seems to be having a nice time in “The Capital of Latin America” as she enjoys the beaches and takes advantage of the gorgeous weather to work out, stay in shape, and lose the baby fat.

As part of the Kardashian motto of ‘we air out everything’ with a capital E, Kourtney’s birth of second child and first daughter Penelope Scotland Disick was aired on the September 17 edition of Keeping Up With The Kardashians for the entire world to witness. What seems to be an extremely private matter for a very great majority of people is nothing but routine for a Kardashian, as long as it brings in viewers and affects the bottom line positively. If broadcasting the live birth of her daughter wasn’t disturbing enough, we were subjected to Kourtney’s now infamous pulling of the baby with her own hands. I’m sure for more than a few people such a thing was a never-before-seen, I personally was left incredulous as the  mom manhandled her baby out of her you-know-what herself. I have however learned never to be shocked at anything a Kardashian does for it is their surprise factor that keeps us talking about them.