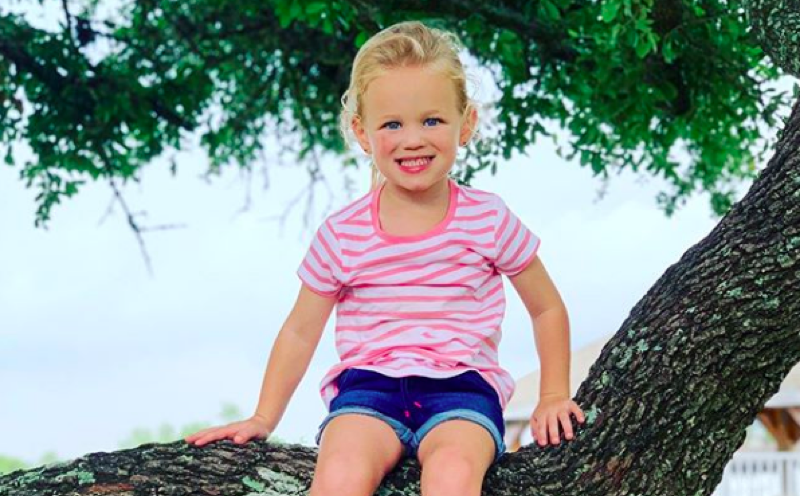 OutDaughtered spoilers and updates tease that often center around Riley Busby as she’s a super-clever student at school. Plus, she chooses to sleep in her very own bedroom. Sassy, and the self-proclaimed boss of the other quints, a lot of fans like her for her attitude. Well, she’s strong-willed and when she said “nope” to school lunches, she meant it.

OutDaughtered Spoilers – Quints Back At School

Like so many kids across the USA, the summer break came to an end, for the quints, so it’s back-to-school time. The kids only started Grade 1 on Tuesday this week, but Riley decided that she’s not into school lunches. This summer, the kids enjoyed a lot of time visiting Spashway Water Park. Plus, they enjoyed their own refurbished pool at home. Winding it all up, just ahead of school, Danielle told her fans that the kids enjoyed a back-to-school bash at a pool party.

Well, even for the lucky OutDaughtered quints, all good things come to an end eventually. So,  the quints all got their haircuts for school. This year, Riley Busby starts with her sisters in the same grade. Remember, she did kindergarten ahead of her sisters. However, they all attend Grade 1 together. And, Riley’s just not having it with school lunches at the moment. So, she made her own.

Taking to his Instagram Stories on Friday, Adam told his fans that his daughter Riley Busby didn’t want lunch at school. So, she decided to make her own. Actually, she did quite well. First, she took two slices of bread and placed some cold meats on her sandwich. Then, she placed a square of cheese on top. Admittedly. she needed some help with getting it out of the plastic cover. However, it looked rather yummy when she finished it.

Blayke Busby, wise in the ways of achievement told her OutDaughtered sister that in the future, she can make everybody sandwiches now she knows how to do it. Next, Riley went to the refrigerator and selected yogurt, a juice box, and a cheese stick to round off her meal. As Adam noted, she really looks like she knows exactly how to do it by herself.

Looking Into The Future

As Riley Busby made such a nice-looking school lunch for herself, TLC fans can probably already see her leading the way in years to come. No doubt, one day, she’ll get herself into the kitchen and rustle up all sorts of nice snacks for those family fun days at the poolside. Of course, knowing Riley, she’ll probably tap the rest of the quints for cleaning up duties afterward.