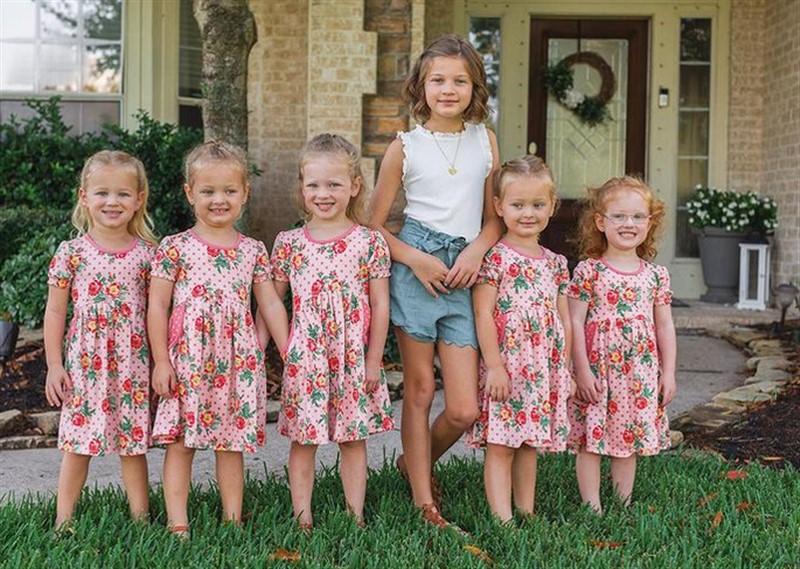 OutDaughtered spoilers and updates tease this summer revealed that the Busby family made the time for the beach, water parks, and a big 4th of July bash at their newly renovated pool. The girls also enjoyed summer camps, and visits with their cousins in Lake Charles, Louisiana. Now, back-to-school looms for Blayke and the quints, so this weekend, they held a back-to-school bash.

When the summer break first arrived, Danielle told her fans that Blayke seemed so ready for it. Proudly, she told her TLC fans that Blayke moves up a grade. Well, as the warm weather season progressed, fans saw that that the kids spent a lot of time swimming. In fact, they kickstarted their summer what a short vacation to Splashway Water Park, the first thing on the quints’ to-do list.

Everywhere that the OutDaughtered kids went, seemed to involve swimming pools and lots of water. In fact, photos emerge off them with family in Lake Charles in the swimming pool. More photos of the kids in their swimwear flowed. Whether at home or at the beach, it seems like the kids were a bit waterlogged. Additionally, this summer, experts resurfaced their pool and laid down a cool deck. So the 4th of July bash became a mini Splashway for a day.

Adam and Danielle told their TLC fans that the kids went for their back-to-school haircuts last week. Plus, they did the shopping that the occasion brings. Then, on her Instagram Stories on Saturday, August 14, Daniell Busby spoke about their bash. Plus, she mentioned how the rhythm of summer soon swings back to the usual routines outside of the holiday season.

Actually, the OutDaughtered kids don’t seem unhappy about back-to-school time. Probably, they look forward to seeing their friends at school soon. Danielle told her fans that they planned a back-to-school bash and Riley seemed thrilled about it. Naturally, it involved everyone landing up in the pool. Certainly,  it looks like the kids and the adults enjoyed themselves very much. The last of the summer slips away and on Tuesday, the kids pick up their new normal in higher grades.

First grade For The Busby Quints

In his post about the girls all going for their haircuts, Adam reminded TLC fans that Blayke starts in 5th Grade. Meanwhile, the quints all move up into the first grade. With the kids returning to school, fans hope that Adam puts together lots of videos for his It’s A Buzz World channel on YouTube. After all, the show’s in-between seasons and fans love watching those cute kids enjoy their lives.

Remember to check back with us often for more news, updates, and OutDaughtered spoilers.