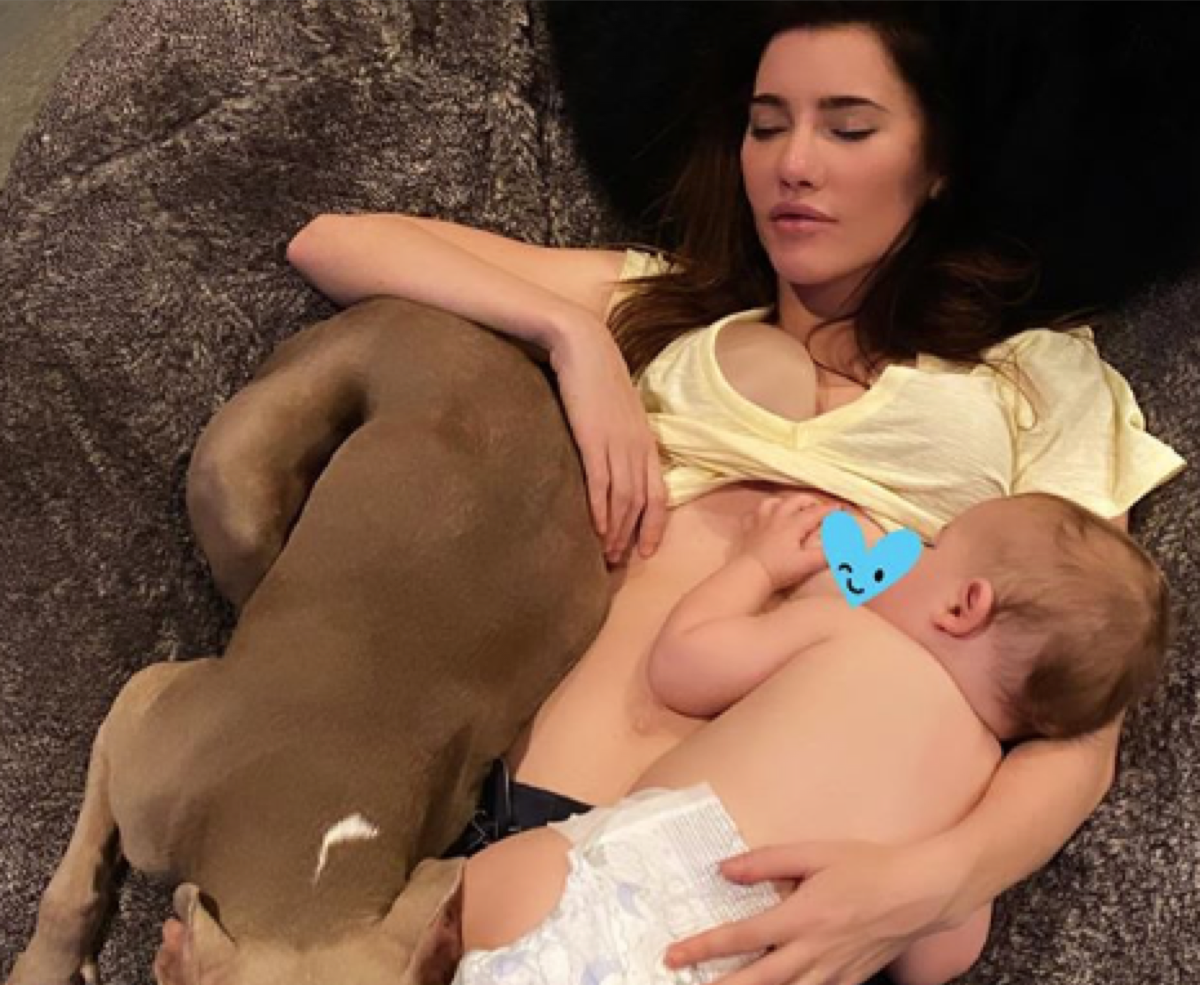 The Bold and the Beautiful spoilers teases that actress Jacqueline Maciness Wood, of CBS’s “The Bold And The Beautiful” recently had a big day at the beach that in her words, wore out her baby, her furbaby and herself and posted about it on Instagram!

Baby Rise Ruspoli Will Be One Year Old This Coming March

Baby Rise Ruspoli will be one year old this coming March, and she posted a cute video of him clad in a diaper and rolling around on a big fluffy “Lovesac”. She commented “Well… the beach wore them out!” and on a second photo on a separate post she had joined them and commented “Wore me out too… sleeping on a @lovesac they are soooo comfortable.”

The furbaby, a pit bull appears to be named “Mateo” according to other postings with him in them. Pit bulls, or “pitties” get a lot of bad press but one has to remember that there are no bad dogs – only bad owners or trainers. The “Our Gang” dog, “Petey” was also a pit bull but people had enough sense not to breed dogs to fight each other. It is the owners and trainers that train pit bulls and other breeds with bad reputations to be mean, and it is not innate in the dogs themselves. Jacqueline is a big supporter of “pitties.”

Jacqueline is married to Elan Ruspoli, and Rise is their only human child so far. She has played Steffy Forrester on the CBS daytime drama “The Bold and The Beautiful” since 2008. She has quite the pedigree, born in Windsor, Ontario, the daughter of (Sandie) Alexandra MacInnes and James C. Wood. She is of indigenous (Cree), Scottish, French and Brazilian ancestry and her half-sister is Dani Probert, who was the wife of the late NHL player, Bob Probert.

Well… the beach wore them out!

Her great uncle was Scottish highland singer Alasdair Gillies. Jacqueline took acting classes at Ryerson University, Centre for the Arts and the Armstrong Acting Studio. She is also a supporter of pet rescue organizations, devoting time to spreading awareness via social activism including Twitter about dog shelters and pet owners’ responsibility, in addition to volunteering with charitable initiatives benefiting animal rescue. She eloped with her husband Evan in July, 2018.

Wood made a name for herself playing the part of the “hair girl” on a commercial for First Choice Haircutters, and at the age of 18, she moved to Toronto to pursue a career in acting. In addition to her acting, Wood is an occasional disc jockey and singer.[She released her debut single “After Hours”, a dance-influenced song penned by her wardrobe stylist, Chaz E. Foley, in January 2012.

Jamey Giddens of Zap2it described the “After Hours” music video as “naughty”, and said “I am digging this thumping, raunchy track and the provocative video.”
Check out CBS’s daytime drama “The Bold and The Beautiful” to see Jacqueline, and check out Celebrity Baby Laundry frequently for all the latest news, updates and developments!