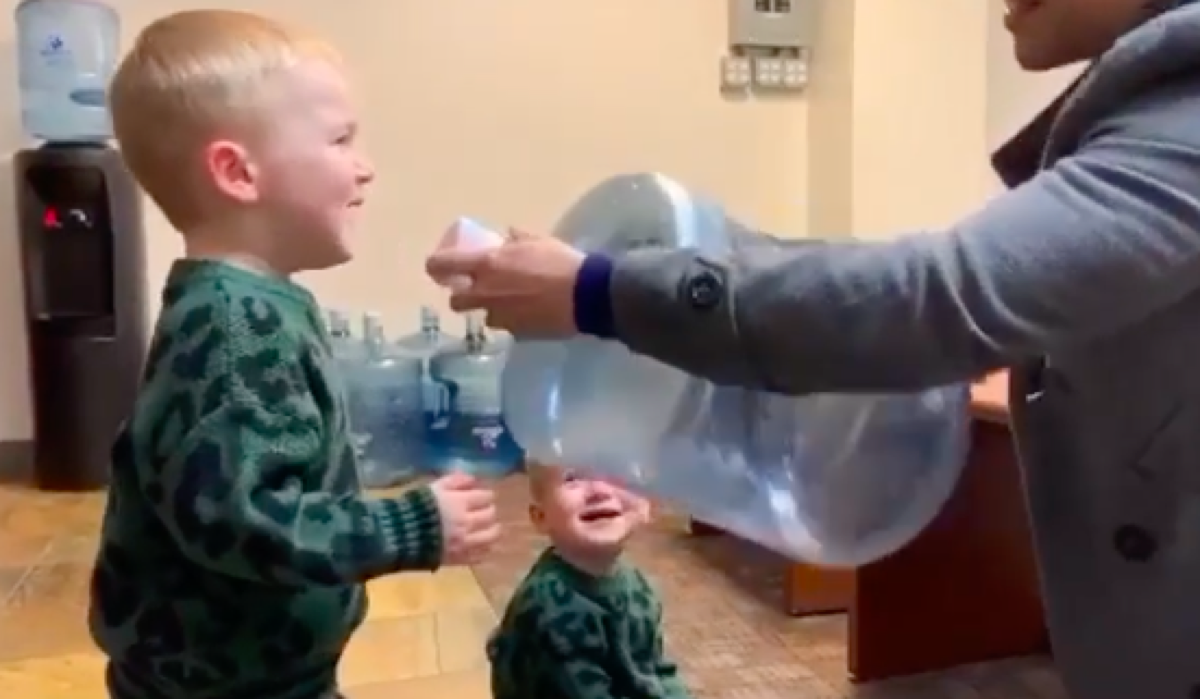 General Hospital spoilers teases that Parry Shen, who plays Brad Cooper on the ABC daytime drama General Hospital, instructed twins Theo and Erik Olson, who play Wiley Cooper-Jones/Jonah Corinthos on the fine art of burping and apologizing for it and made a funny video and posted it on Instagram! The little boy’s mother also comments in the post.

Parry is obviously in the area where the huge bottled water jugs are stored on the set of General Hospital that would go in a bottled water machine. Both twins and their mother are there, and Parry posted; “Instructing @theo_erik_olson the proper way to burp & apologize- always keepin’ it classy #Repost @theo_erik_olson with @get_repost ・・・Then a response from the babies – Brad may be in prison but @parryshen is still hilarious and we still LOVE playing with him!! . .

Even though we didn’t have scenes with him in yesterday’s episode, we still got to see him in the green room!! . . . TUESDAY TRIVIA: Everyone is so excited that the truth about the #babyswap is finally out! And so are we!!!! Except that it means we most likely won’t be working with our favorite Parry! …

Like Michael said in yesterday’s episode, Wiley is too young to remember his life with Brad & Lucas, and that makes me as their mom real sad because @ryancarnes1 and Parry are such wonderful men and they’ve forged beautiful relationships with the boys. . On a happier note (because we’ve all been shedding so many tears lately because of #gh), Erik did an amazing job on Friday and Theo was our little actor dude in yesterday’s episode.

Fun fact is that this extraordinary TWO year old stood by the side of that coffee table for hours, while they rehearsed & filmed!!!!!” Much reference is made to characters in the post – “Michael” is Michael Corinthos, played by Chad Duell, “Lucas” is Lucas Jones, played by Ryan Carnes, and the husband of Brad and the uncle of Michael, and Wiley was recently revealed to be the presumed dead son of Michael.

In real life, Parry is straight, and has been married to his wife, Kim Hollands since August 2002. They have two daughters, Avery and Kori, and Kim is a fourth grade teacher. Parry Shen was born on June 26, 1973 in Queens, New York, USA and Attended the State University of New York at Buffalo (UB) until 1995 and was an Orientation Aide for incoming freshman.

He did an extremely comical rendition of Brandon Walsh (Jason Priestley) from Beverly Hills, 90210 as part of the orientation program. He also replaced Russell Yuen’s dialog (who played Hideki, Japanese Astronaut) in The Day After Tomorrow and was second in line to play Harold in Harold & Kumar Go to White Castle. The part ultimately went to ‘John Cho’, Parry’s former cast mate in Better Luck Tomorrow.

Watch ABC’s General Hospital to see Parry in action and check Celebrity Baby Laundry frequently for all the latest news, updates and developments!