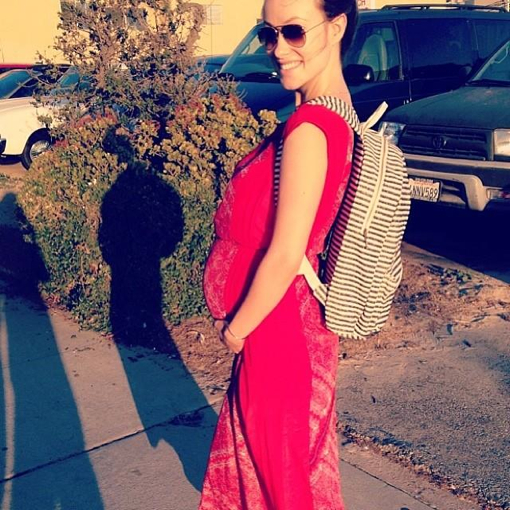 Olivia Wilde took to her Facebook to show off a picture of growing bump on Monday (Feb. 24).

“Sure I’ve looked like this after Mexican food but this time it’s a BABY.#almostcooked #nineweekstogo #holyfu&$,” she captioned a shot in which she wears a long maxi dress while cupping her bump.

During the first months of her pregnancy, the Rush actress joked that people were afraid to acknowledge her pregnancy.

“Even when you are clearly — like, I feel like I’m clearly pregnant — people will be like, ‘Hey, would you like a glass of whiskey? Would you like to get on this roller coaster?’” she joked during an appearance on The Tonight Show With Jay Leno in December. “And I go, ‘Oh, well, I’m actually pregnant.’ And they go, ‘What?!’ Unless someone’s watching you give birth, I don’t think they want to make the wrong call.”

This will be the first child for Wilde and fiancé Jason Sudeikis.