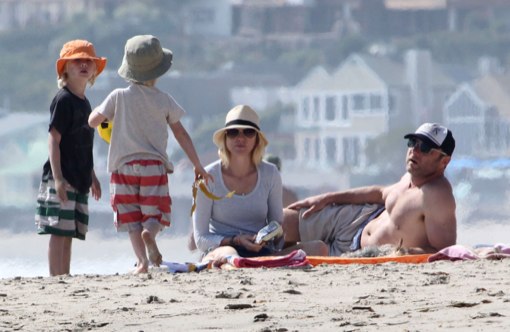 Naomi Watts and Liev Schreiber enjoyed a day on the beach with their sons Alexander and Samuel in Malibu, CA on Saturday (March 23).

The family had a ball playing in the water and climbing over rocks.  The two brothers also kicked around a ball while their parents relaxed on a beach towel.

Watts has vowed to age gracefully because she fears plastic surgery will make her look “freakish” and ruin her ability to show emotion on screen.

“I certainly don’t judge anyone who does it, but most of the characters I play are going through some kind of emotional turmoil, so my job requires me to have expression,” she tells Good Health magazine. “If my face was frozen, what right do I have to play that part? All the women who haven’t (done) anything to their faces are still able to play great roles. And some of the ones who have done something have messed it up – they look freakish. Anyway, for me it’s about playing women with rich lives – and the longer the life, the deeper the wrinkles.”

Meanwhile, Liev is keeping busy. He is appearing in four different movies in 2013.