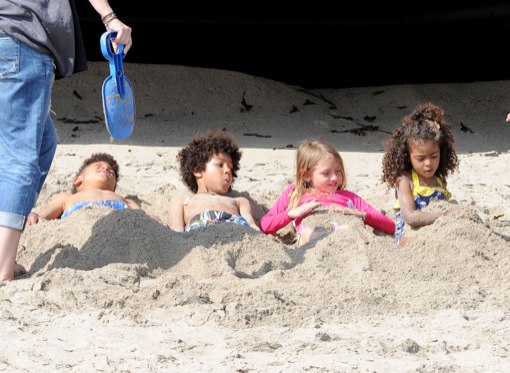 Heidi Klum took her four kids Leni, Henry, Johan and Lou to the beach with some family in Malibu, CA on Saturday (March 23).

The family looked absolutely adorable as they played together on the beach. At one point, a family member covered the youngsters in sand while they laughed and giggled. Heidi took pictures of the activity and then helped Leni do handstands in the sand.

The Project Runway has started her work commitments as judge on the upcoming season of America’s Got Talent. On Wednesday (March 20), she attended the start of talent shows tryouts in San Antonio, TX.

Heidi is also appearing in a brand new commercial for the Carl’s Jr. and Hardee’s fast food chains.

“Have you ever been seduced by a burger before? After this commercial, ya just might!” the model asks in a behind-the-scenes clip. “Basically, I am Mrs. Robinson and I am seducing this cute little boy… with my burger“.

The sexy commercial is set to hit TV networks later this month.