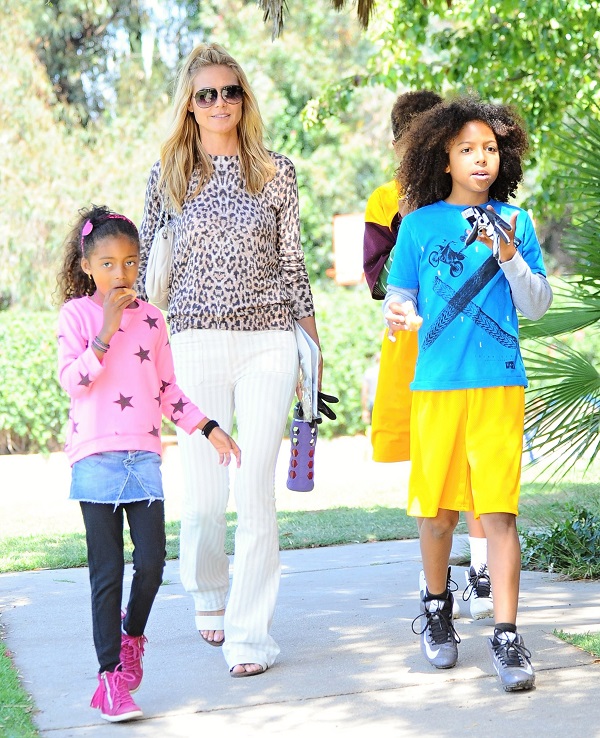 Heidi Klum can add soccer mom to her impressive resume.  The model, TV host, and mother of four was spotted at a park in Brentwood, California on Saturday May 21 to cheer on her son Johan Samuel (10 years old) at his flag football game.  Johan’s brother Henry (11 years old), sister Leni (12 years old), and little sister Lou (6 years old) tagged along to show their support and enjoy a sunny afternoon in the park.

Heidi and Leni sat down in their lawn chairs together to enjoy the game – they appeared to be having a blast and were cheering for Johan and giggling with each other.  At one point, Heidi’s pal actor Mark Wahlberg stopped by to say “hi” – he was there cheering on his sons.

Klum’s son Johan suffered a minor injury during the game and the referees called a timeout.  Heidi left the sidelines and rushed on to the field to check on Johan.  His coach helped him up and dusted him off, it turned out that he was just fine!  Heidi returned to her seat with Leni to enjoy the rest of the game.

Heidi Klum has been spending a ton of time with her kids and boyfriend Vito Schnabel – she’s making the best of the final days before she heads back to work as a host on NBC’s reality TV show ‘America’s Got Talent.’  The show is set to return to NBC on May 31 2016, Klum has been hosting the show since 2013 and this year she will be joined by the popular TV host Simon Cowell.