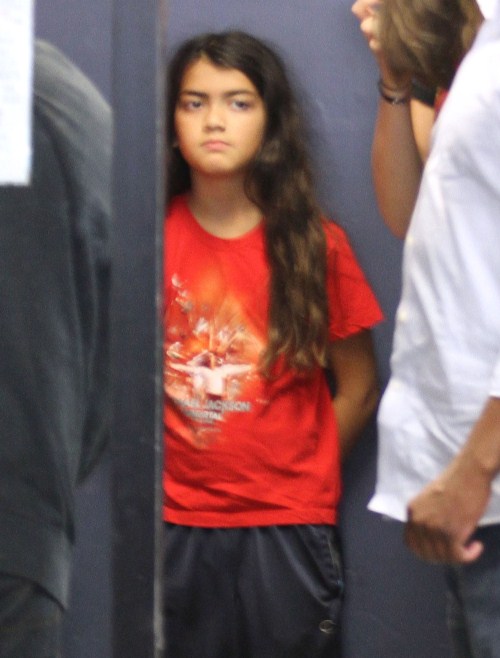 As of recent the Jackson family drama has cooled down in the media, but things are still a brewing behind the the scenes. Michael Jackson’s kids Paris, Prince and Blanket were spotted arriving with their bodyguards at their lawyers office in West Hollywood, California on Monday.  Blanket wore a Michael Jackson Immortal Cirque De Soliel shirt as he waited for an elevator while Paris and Prince kept their backs turned to the paparazzi.

Drama emerged in the Jackson family after Katherine Jackson the mother of Michael Jackson disappeared for ten days. Paris and Prince accused their family members or more specifically  Janet, Jermaine and Rebbie Jackson of kidnapping Katherine and holding her hostage in Arizona. Paris publicly demanded on her Twitter account to speak to her grandmother after fighting for days to have contact.

Obviously, Michael Jackson’s kids are not ready to back down and are going to fight to keep the greedy “Jackson family’ away from their money.   Michael seems to have instilled in them the good sense to be suspicious of the motives of the people surrounding them.

Kevin Federline Takes The Boys For A Haircut