Kevin Federline Takes The Boys For A Haircut 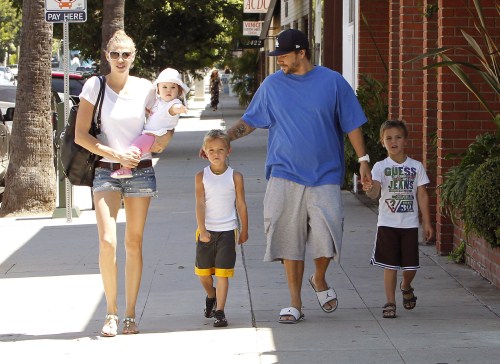 Kevin Federline and his longtime girlfriend Victoria Prince took their daughter Jordan Kay and his boys with Britney Spears, Sean Preston and Jayden James to get their hair cut at The Yellow Balloon salon in Studio City, California on Wednesday.Federline held his sons hands while Prince who wore daisy duke shorts and a white shirt held daughter Jordan.

Sean and Jayden looked great with their new haircuts. Federline on the other hand looks like he has gained more weight since they last time he was spotted. Apparently, the weight loss tricks he learned on Celebrity Fit Club didn’t stick!

Meanwhile, Spears attended a conservatorship hearing on the same day. She was alone and was spotted not wearing her engagement ring from fiance Jason Trawick. Unfortunately, only adding to the reports that things are a rot in the Spears circle recently.

Onlookers reported the X Factor judge seemed “robotic and out of it” and was spotted chain smoking during frequent breaks for her new Elizabeth Arden commercial.

”She seemed to be just going through the motions when the camera was rolling, and seemed out of it,” a witness told Radar Online.