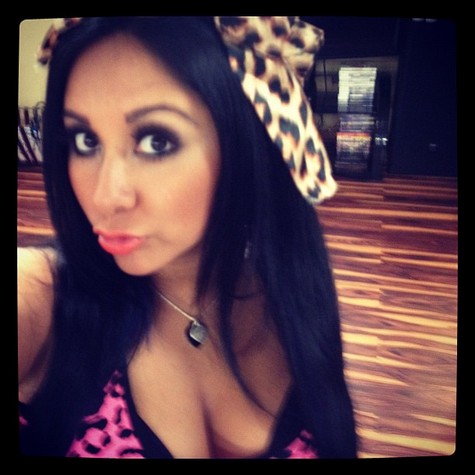 When Nicole “Snooki” Polizzi first announced her pregnancy a lot of people wondered how the situation would change her lifestyle.  The Jersey Shore star seems to have truly cut out the partying but her wardrobe is still pretty similar.  The big belly hasn’t caused her to lengthen her skirts or avoid the low-cut tops, as evidenced by the cleavage baring photo that she tweeted just yesterday.

Snooki recently told US weekly that she’d now a D cup and absolutely hates it.  You have to wonder if boyfriend, Jionni LaValle, disagrees completely on the subject. Snooki has spent her summer shopping, doing art projects and changing her hair at the drop of the hat while anxiously awaiting the arrival of her son.  Baby Lorenzo is set to make his grand appearance within the next few weeks.

Also set to begin in the next few days is the taping of season two of “Snooki & JWOWW”.  MTV recently rented out a house in Manchester, NJ and that’s where Snooki will be spending her last pregnant weeks.  No word yet on whether or not she’ll be living there with Lorenzo in order to continue filming the show.

How do you think Snooki has handled herself during her pregnancy?  Let us know in the comments below!