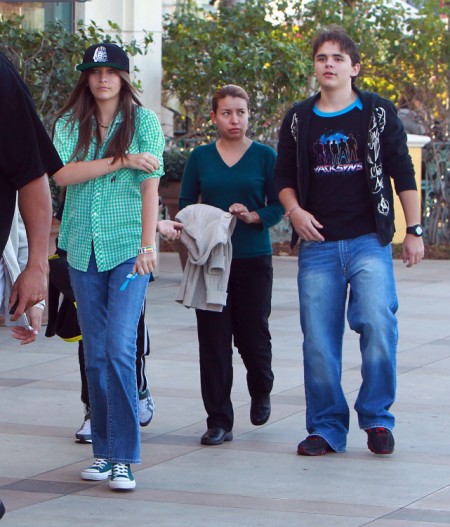 Katherine Jackson may be returning to her grandchildren as their ex-guardian but Michael Jackson’s oldest child, Prince Michael Jackson, is not ready to let his family off the hook for their crazy behavior just yet.

TMZ reports Prince sent out a tweet that included a text message from July 23rd. It read, “This is enough so I am texting you for the simple fact that WE DEMAND TO SPEAK TO MY GRANDMA NOW!!!”

A reply comes from “Janet Jackson” and it said, “Don’t let them pls.” TMZ says the messages appears to continue, but Prince did not post the rest of it. Prince also tweeted, “Although I am happy my grandma was returned, after speaking with her I realized how misguided and how badly she was lied to. I’m really angry and hurt. For this whole time, they denied us contact to our grandmother. If you continue with your lies I will continue with the truth. As long as I can remember my dad had repeatedly warned me of certain people and their ways.”

Katherine is challenging the court ruling that stripped her of her guardianship rights over Michael’s children and told ABC’s Nightline that she never wanted TJ Jackson to take over her duties. TJ told the court that Katherine supported his decision. In a taped segment for Nightline, the 82-year-old read prepared documents and said, “Their ruling in court today was about the guardianship, and I think it was based on a bunch of lies. But I have a good idea who’s doing that … who’s behind it” and she told TJ “…it wasn’t necessary for him to go down and sign up for guardianship, but I don’t know who instructed him to do that … ’cause he wanted me to come home before that happened.”

This whole situation has gotten completely out of hand and I have no idea who to believe anymore. TMZ described Katherine’s interview at Nightline as looking like a “hostage situation” because she was flanked by Janet, Jermaine and Rebbie Jackson, among others. It seems Michael’s kids don’t trust their aunts and uncles but they do trust their grandmother. However, their grandmother is controlled by her children. Maybe it was a good idea that guardianship was changed? What do you think?