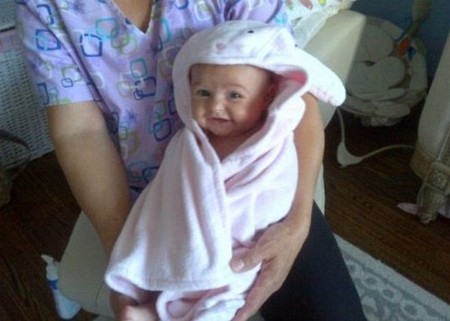 Rachel Uchitel gave birth to her first child, a daughter named Wyatt Lily, on May 15th and she has decided to start sharing some photos with her fans via Twitter.  One shot that has given the media, including TMZ, an eyeful shows Uchitel’s cleavage as well as her adorable baby girl (whose father is businessman Matt Hahn.)

Tiger Woods’ ex side dish is the latest in a long of celebrities to document her child’s growth on Twitter after posting six pictures that show Wyatt Lilly from just one week old to the present day.  Uchitel, a sometimes U.S. television correspondent also appears to have regained her enviable figure within a few short weeks.

Do you think that getting married and having a baby has settled this former bad girl down?  She has a reputation for setting her sights on married men. She was knee deep in the Tiger Wood’s scandal as the main chick he had cheated with and then had a public affair with David Boreanaz.   Uchitel later did a turn on Celebrity Rehab with Dr. Drew and met Matt Hahn shortly thereafter.

Has Wyatt changed Uchitel for the better?  Tell us your thoughts in the comments below!