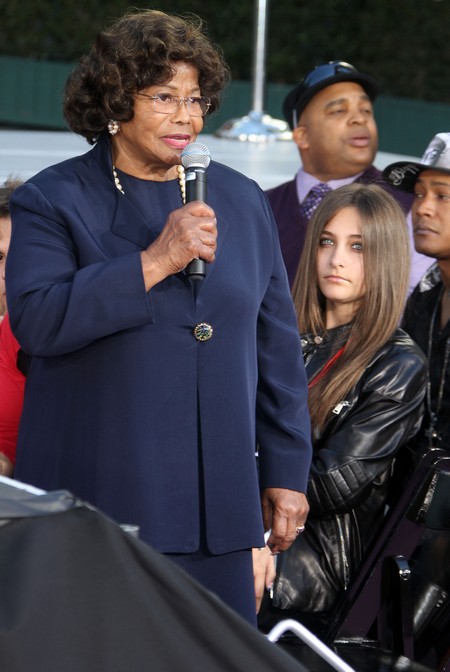 Finally! RadarOnline reports that Katherine Jackson arrived back at her home in Calabasas early Thursday morning, after two weeks in Arizona. The Jackson family has been involved in some serious insanity the past couple of days, with rumours of some family members drugging Katherine and trying to steal the kids away for money.

Paris Jackson confirmed the homecoming in a tweet, “[G]randma’s here! #thankyougod” Paris followed up this with saying she has “been awake for 23 hours” and that it was ”time to #hibernate”. Paris also re-tweeted several of her uncle Marlon Jackson’s tweets.

Marlon tweeted early Thursday morning, “Hello everyone Thank you for your support. I’m tired of not knowing where my mom is. I did speak with her last night but she didn’t sound like herself. I was told by Janet, Randy and Jermaine that I could not see my mom. Doctor’s order. But I see them on television with her. How come they could not call me so I could be with her as well. my mom is home she look and sound great. thank you everyone for your support, Study Peace. [sic]”

Katherine has, since her arrival this morning, quelled all of the rumours which have plagued the family for the past week. She has denied any involvement of drugging, conspiracies and plots. We’re glad to hear that Katherine, but aren’t people who are being drugged and used in a conspiracy plot supposed to say that?

Randy Jackson (no relation to the American Idol judge) tweeted after Wednesday’s court ruling, “WHY would it be necessary for TJ to take guardianship of the children away from my mother when they were already in his care? THIS IS NOT OVER.”

Wow, this family is more messed up than Honey Boo Boo at a family meeting of rednecks and schizophrenics!