Honey Boo Boo Is Back With A New Reality Series! (Video) 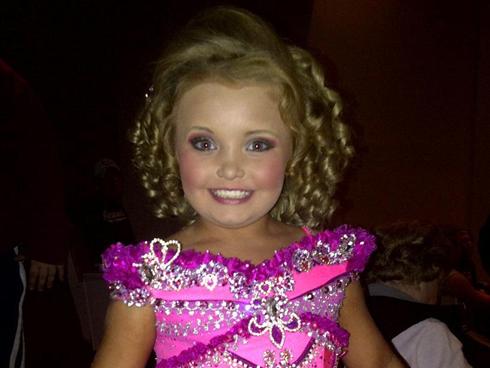 Honey Boo Boo is back! Lock up your children and hoard for an apocalypse! Honey Boo Boo is also known as Alana Thompson and has more one-liners than our grandma at Christmas.

Alana became famous on TLC’s popular (and terrifying) reality show “Toddlers and Tiaras”. She has achieved the impossible dream of getting her own spin-off mini-series called “Here Comes Honey Boo Boo”.

The trailer of her show introduces her bizarre family again: Mother June, father “Sugar Bear” and sisters “Pumpkin”, “Chubbs” and “Chickadee”.  In the trailer, “The Thompsons are seen frolicking in mud puddles, slapping their bellies and arguing about whether or not they are rednecks”.

Could someone please phone the insane asylum and send us there?

Alana became (in)famous on an episode of “Toddlers and Tiaras” where the toddler drank a beverage which was a mixture between Mountain Dew and Red Bull. Alana became extremely energetic before the show and was seen running around in circles, like our grandma at Christmas.

Alana famously quipped, “I want to win because I want to make money. A dollar make me holler, honey boo boo!”

Her mother June spoke about the beverage, “A lot of pageant moms and people know what the ‘special juice’ is. Everybody has their different concoction. ‘Special juice’ is to help energize her,” June says in the clip. “A lot of moms say, ‘Oh, you’re doping up your child.’ No I’m not. I’m not hurting her.”

Her mother added, “We had tried Pixy Stix, as they’re called ‘pageant crack.’ We went through 15 bags at one pageant, and it just don’t do anything for her,” June says. “She just drinks it for pageants, to give her that extra ‘oomph.’ So, whatever works for your child, use it.”

Pageant crack? Mystery beverages? Extra “oomph”? Wow, why does this so eerily resemble our grandma at Christmas?

In other news, Honey Boo Boo is scaring babies at a Chuck E. Cheeses near you!

Selma Blair Matches With Son Arthur Bleick While Out At Lunch