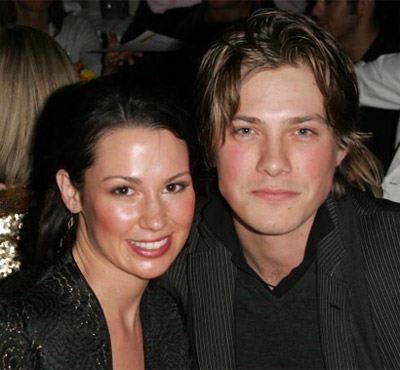 A long time ago, when the current twenty something generation were little kids, a very popular song exploded on the charts. It was called “MMMBop” and was sung by a brand new boy band called Hanson. Hysterics ensued and a few teenage girls bought VHS tapes to record their concerts and interviews. One of the Hanson brothers is all grown up and married now. This is his story… (not really, but it sounds dramatic enough).

Taylor and Natalie Hanson are already parents to four kids and they’re expecting their fifth kid later this year. This is almost as much as Octomom! Boy bands aren’t good for nothing, they’re virile!

The Hanson couple started searching for the baby name, as soon as the pregnancy pen had a smiley face on it. Natalie writes in her blog for Nameberry.com, “Thinking back on all the children’s names has helped to give me a fresh perspective in choosing the name for the baby girl we are expecting in the fall. It has helped to remind me how the right name seems to come at the right time and how, no matter how ‘perfect’ the choice, it will only be a part of all this little person will become.”

The couple’s first born was named after his father, whose full name is Jordan Taylor Hanson. Natalie says that little Jordan Ezra Hanson has lived up to his name’s quirky traits. Natalie says, “This yin and yang is apparent in my first son’s name choice. I pictured a wise, quirky, old man and I was sold,” she jokes. “Ezra turns 10 in October and I am still in love with his name.”

Natalie and Taylor’s daughter’s name is Penelope Anne and their other son is named River Samuel.  According to Natalie, Penelope was a tribute to her own mother and it’s a “whimsical and fun sounding” name. They deviated from the path when they gave River his name. She says about this, “I hesitated at first. Was it presidential enough? When I mentioned the name to my grandfather, he immediately started singing ‘Ol’ Man River,’ which I loved.”

Before their third son was born, Natalie and Taylor experienced a bit of controversy in their family in choosing the name. Their fourth son was named Viggo Moriah (OMG). Natalie says about this foreign sounding name, “The Hansons have a large whiteboard in their kitchen where all family business is posted. I took a marker and wrote on the board, ‘TH Family baby number four will be named Viggo Moriah. That is the name. It will not be changed,’” she recalls. No one was so bold as to question it to our faces, but after Viggo was born, the truth came out that the name was definitely in hot debate when we weren’t around.”

Hmm, we can’t imagine what the other kids will say about Viggo Moriah in school…

Honey Boo Boo Is Back With A New Reality Series! (Video)

Taylor Hanson To Become A Father For The Fifth Time