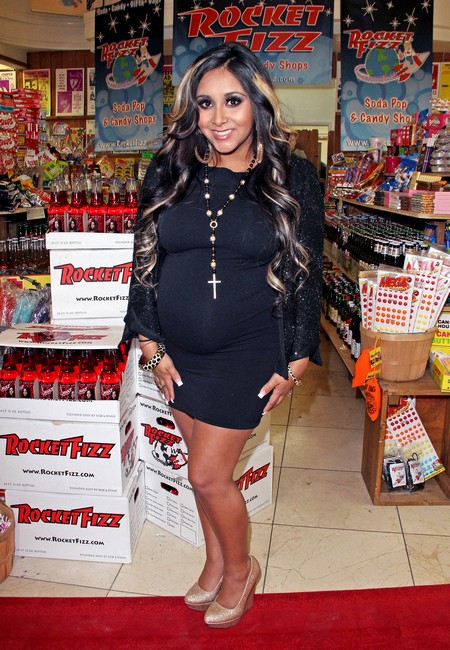 Drama follows Nicole “Snooki” Polizzi everywhere she goes and so of course even her baby shower is looking like it could easily turn into a big catfight.  The event is set to be filmed for Snooki’s Jersey Shore spin off show, Snooki & JWoww and the reality star is making the most of the opportunity.

Radar Online has learned some details on her shower plans,“Her team is already calling around to get all sorts of baby freebies for the event,” a source told Star, who revealed that many of the guests will be familiar faces, including  Snooki’s mom, fiancé Jionni LaValle’s mother, best friend Caitlin Ryder and Jersey Shore castmates Jenni Farley and Sammi Giancola.”

One person that may not be invited is Snooki’s once good pal, Deena Cortese.  It seems that the once tight “meatballs” aren’t so close any more and the other cast mates aren’t complaining.

“The girls are angry with her because she copies everything they do and they just want to distance themselves.” says a source.

Will you tune in to see Snooki’s baby shower on Snooki & JWoww?  Do you think Deena will make an appearance or has Snooki’s pregnancy (and inability to party) put an end to their friendship?  Let us know your thoughts in the comments section below!

Haylie Duff’s Baby Shower: All the Details and Photos!