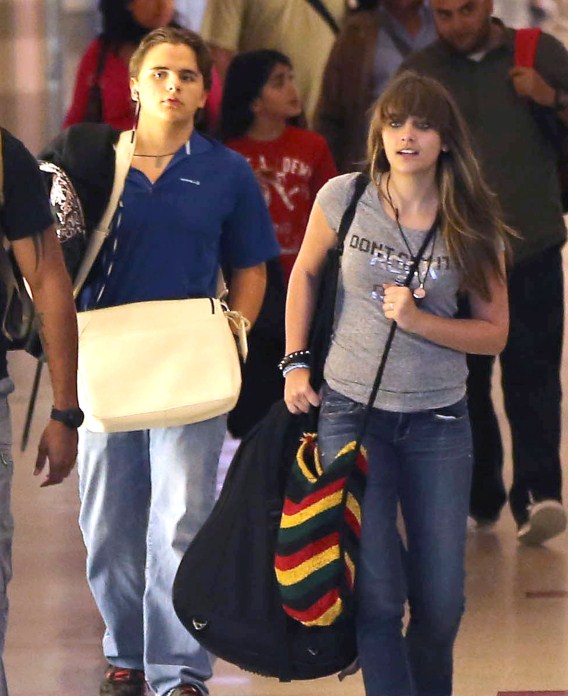 Michael Jackson’s kids Prince, Paris and Blanket were spotted arriving on a flight at LAX airport in Los Angeles, California on Sunday. The kids were flying back from their father’s hometown of Gary, Indiana where they had celebrated their late father’s birthday on Wednesday. Paris wore a gray shirt with jeans and carried two bags as she walked in front of her brothers. Prince wore casual jeans that he paired with a blue shirt. Blanket followed behind looking adorable with his disheveled hair.

The planned trust fund for Prince, Paris and Blanket remains empty three years after Jackson’s death, despite almost $600 million generated posthumously from Jackson’s music, legendary likeness and salvaged assets. Lawyers and accountants are still sorting through the singer’s towering pile of debts and legal bills, and the process could take another two to five years, one lawyer told the Daily News.

“The probate is still pending, and although almost all of Michael’s personal debt has been or is about to be paid in full, the estate is technically still in debt,” estate lawyer Howard Weitzman said. “Once all of the creditors’ claims, taxes and pending litigations have been resolved, the trusts will be funded per court order.”

The “Michael Jackson Family Trust” calls for the singer’s three kids to share 50% of the trust balance, with the other half going to his mother
Katherine Jackson, during her lifetime.

Miranda Kerr: Becoming A Mother Has Changed “Everything”