British Royal family news reveals that Prince George is a huge football fan and when he learned that his dad Prince William was off to see a game he did what any 7-year old boy would do, he “begged” him to go along.

According to sources, the tyke won the day, getting to go watch England play Germany in the European Football Championship. The pictures from that day are adorable and show the youngster with his parents, eagerly cheering on his favorite team.

George was dressed in a cute matching suit and tie similar to his father and mom Kate also accompanied the father-son duo for the Euro 2020 last-16 clash at Wembley Stadium.

George isn’t seen often in the spotlight so his visit was extra special for royal fans as well as for the young future king. The couple also has children Princess Charlotte and Prince Louis.

According to royal watcher Duncan Larcombe, George was determined to see the game in person. He told OK!, “George idolizes his dad. That’s why we saw him looking so smart in his suit – he really wanted to dress like William.” 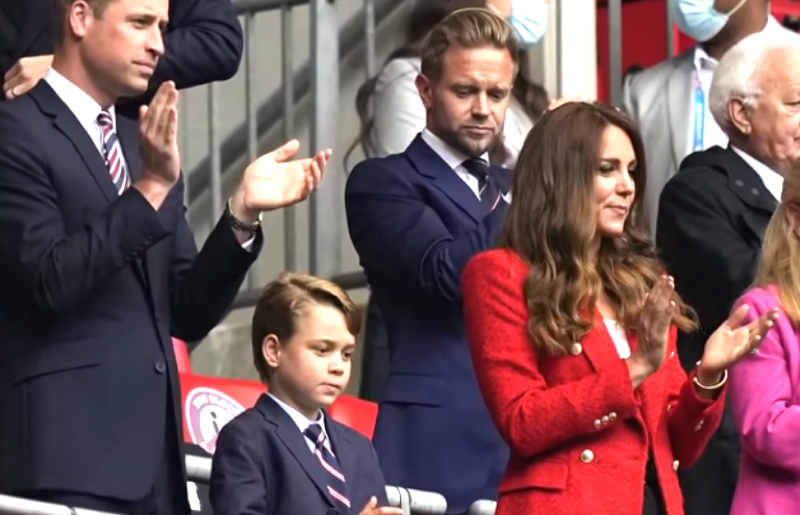 Prince William and Kate will attend the final Euro 2020 match on Sunday but it’s not been announced if George will be with them when The Three Lions take on Italy at Wembley.

Larcombe said, “William would never have normally taken him to the football because it was an official outing in his role as president of the FA, but George absolutely begged to be allowed to come along.”

He added that George, “twisted his parent’s arms. That’s why Kate came, so that when William had to meet all the dignitaries, George could stay with her.”

After the royal’s team won, Kate and William tweeted congrats to the team and there, “incredible performance.”

George seemed a little shy when the fans were asked to sing God Save the Queen at the start of the game but he got animated when talking with former footballer David Beckham.

George’s first in-person game was with his father when Aston Villa played Norwich City in 2019. Later that year he was photographed in a Three Lions T-shirt during England’s lionesses’ World Cup campaign.