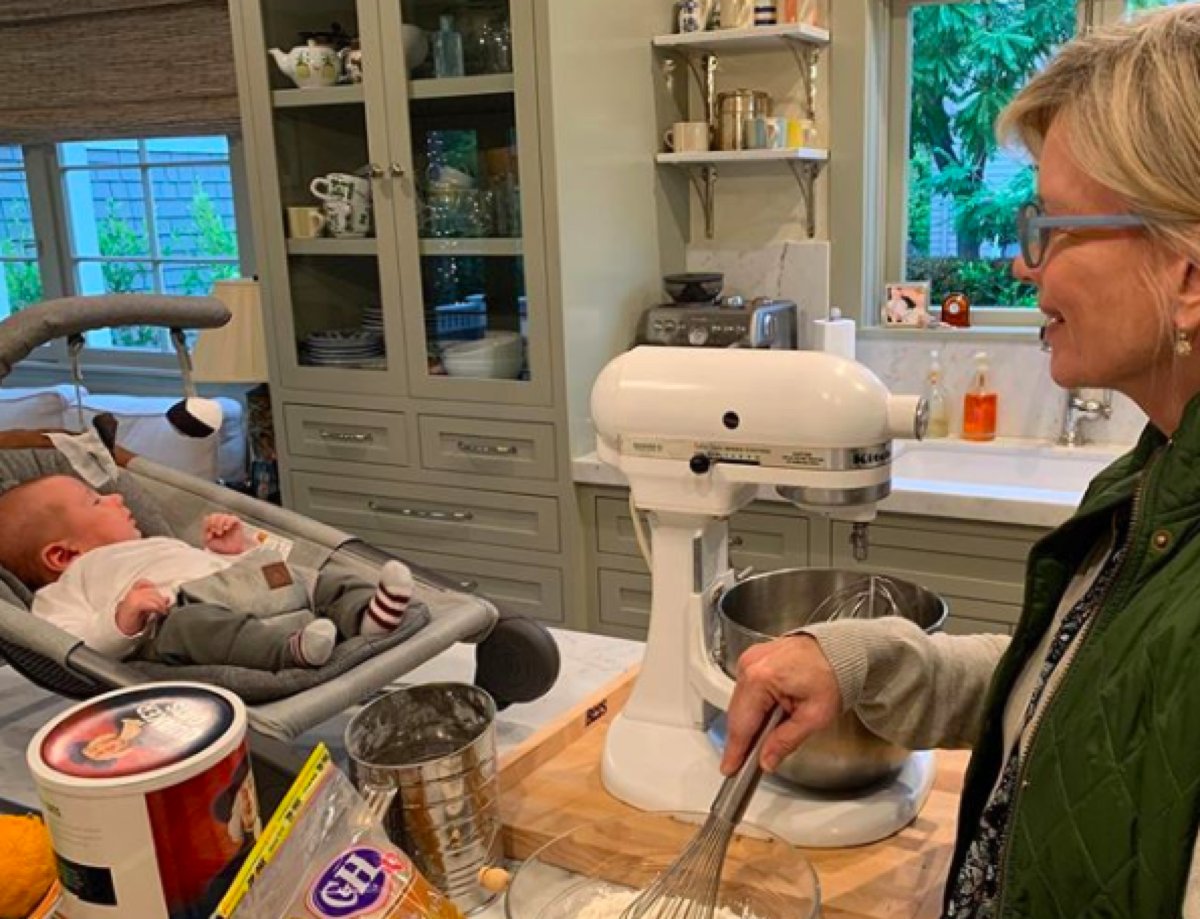 Days of Our Lives spoilers tease that Mary Beth Evans, who plays Dr. Kayla Brady on the NBC daytime drama “Days of Our Lives” decided to include grandson Luca in her oatmeal cookies preparation, and posted it on Instagram.

Adorable baby Luca Michael, born to Mary Beth’s daughter Katie and her husband Cory, was born on February 24, 2020 making him not quite two months old. Luca Michael is Katie and Cory’s first child. He is sleeping in a baby carrier on the counter or table where Mary Beth has obviously set everything out for making oatmeal cookies. She commented on the cute photo, “Little helper.”

You can also see the corner of what appears to be a bag of chocolate chips so she might be making oatmeal chocolate chip cookies – yum! Mary Beth and her husband have two other grandchildren through their son Daniel and his wife Sharon, Henry was born in 2018 so he will be two this year and his little sister Alice Judith was born March 11, 2020. Mary Beth enjoys all of her grandchildren and is a proud grandma!

Mary Beth Evans has been married to husband Michael Schwartz since November 3, 1985. They have three children: Danny, Katie and Matthew. She is an actress, and although she is best known for playing Kayla Brady on Days of Our Lives, she also played Sierra Esteban on the legendary, but defunct, CBS daytime drama “As The World Turns” and Katherine Bell on the ABC daytime drama in the mid-1990s where her television partner from Days of Our Lives, Stephen Nichols who plays Steve “Patch” Johnson, played General Hospital’s Stefan Cassadine.

Mary Beth is also an avid cook and foodie, and once marketed her homemade mini apple pies in the Williams-Sonoma catalog, and says of that venture, “The year that my baby pies debuted in the Williams Sonoma catalogue, they were the No. 1 seller for Thanksgiving.

I’ve had some successes for not even being a chef or anything.” She also has had a mini-cooking show on the DOOL app for several months, called “MB’s Kitchen”. Fans can still find some episodes by using the search function and typing in “MB’s Kitchen” or online at https://thedoolapp.com/recipes/ and both recipes of both her own and her Days of Our Lives co-stars can be found there.

She also finds time for blogging in her schedule She launched her lifestyle blog Plank (www.plank blog.com) in 2015. In 2016, she talked with Stephen Nichols about parenting and grand parenting, where she posted “Stephen Nichols and I have known each other for more than 30 years, and I’ve always known that he’s an amazing father; but watching him become an amazing grandpa has been so much fun.

Before our summer break, I asked him to sit down with me to discuss parenting and grand parenting. Hope you enjoy our chat!” You can see her interview with him here http://www.plankblog.com/family/parenting-grandparenting-a-conversation-with-stephen-nichols/ -that certainly should be an interesting conversation!

Stay tuned to Days of Our Lives and keep checking Celebrity Baby Laundry frequently for all the latest news, updates and developments!