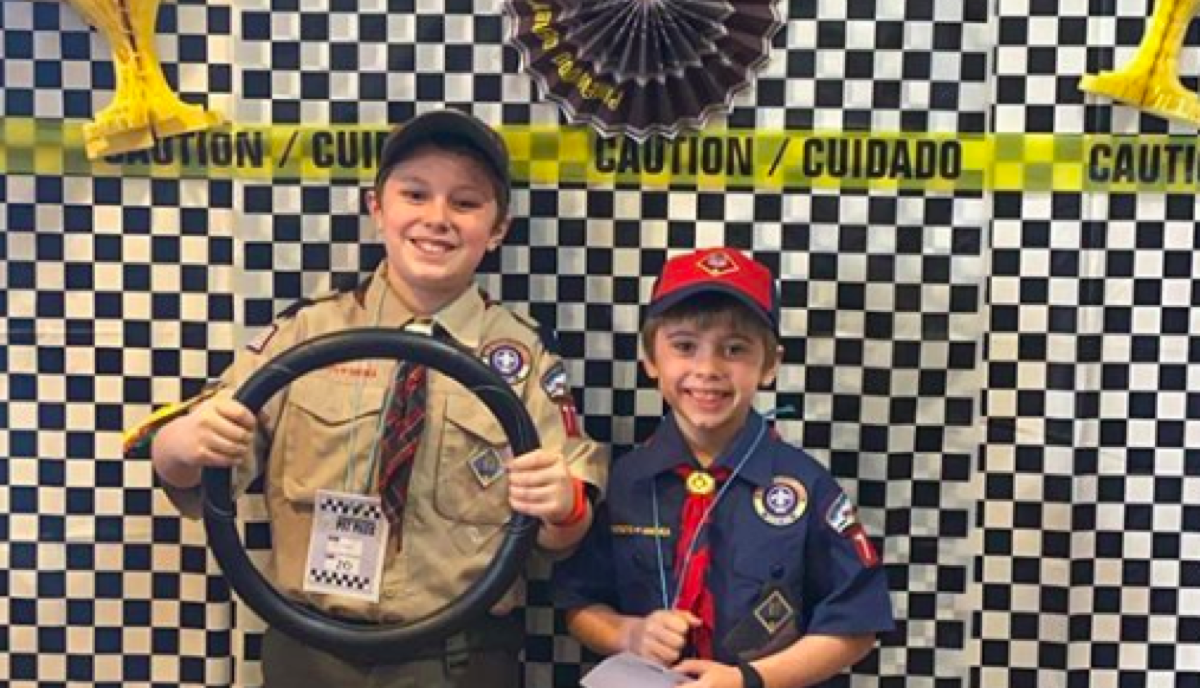 What Is A Pinewood Derby?

First, let’s explain what the function is that her boys, the older named Jackson, in the tan uniform, and the younger, named Levi, in the blue uniform attended. The pinewood derby is a racing event for unpowered, unmanned miniature cars. Pinewood derbies are often run by chapters (packs) of the Cub Scouts program of Boy Scouts of America.

With the help of adults, Scouts build their own cars from wood, usually from kits containing a block of pine wood, plastic wheels, and metal axles. With the popularity of the pinewood derby, other organizations have developed similar events, and a small industry has developed to provide organizer equipment (e.g. tracks, timers, and scales) and awards (e.g. trophies and ribbons).

Similar Cub Scouting events include the raingutter regatta (a race for miniature boats) and the space derby (a race for rubber band-driven propeller shuttles).The Pinewood Derby was introduced in 1953 in Manhattan Beach, California and loosely based on the popular soap box derbies of the time.

Absolutely had a BLAST at our first #pinewoodderby!

Emme put up two Pinewood Derby based posts, in one she wrote “Absolutely had a BLAST at our first #pinewoodderby!’ and in the other she wrote “#pinewoodderby #cubscouts. One picture has the older boy, Jackson, holding up what appears to be an inflated inner tube like a steering wheel.

Lots of fans and friends who have little Boy Scouts and Girl Scouts and some grown up Boy Scouts and Girl Scouts commented on both of the posts! Emme and her husband Don Money are the parents of Jackson Robert Money, born on October 22, 2009, Levi Thomas Money, born on November 3, 2011 and the baby of the family and only girl, Dakota Rose Money, born June 26, 2016. They also have furbabies, a black and white dog named Blue, and two Himalayan longhaired cats who she hasn’t named in any of her posts.

Emme is an actress, known for playing Abby Newman on the CBS daytime drama, “The Young and The Restless” and Lizzie Spaulding on the defunct CBS daytime drama “The Guiding Light” as Marcy Rylan. She currently plays Lulu Spencer on the ABC daytime drama “General Hospital” and also is the proud crafter and owner of an Etsy shop where she sells her handmade jewelry and knitted items through.

Check out General Hospital to see Emme as Lulu Spencer, and check out Celebrity Baby Laundry for the latest news, updates and developments!