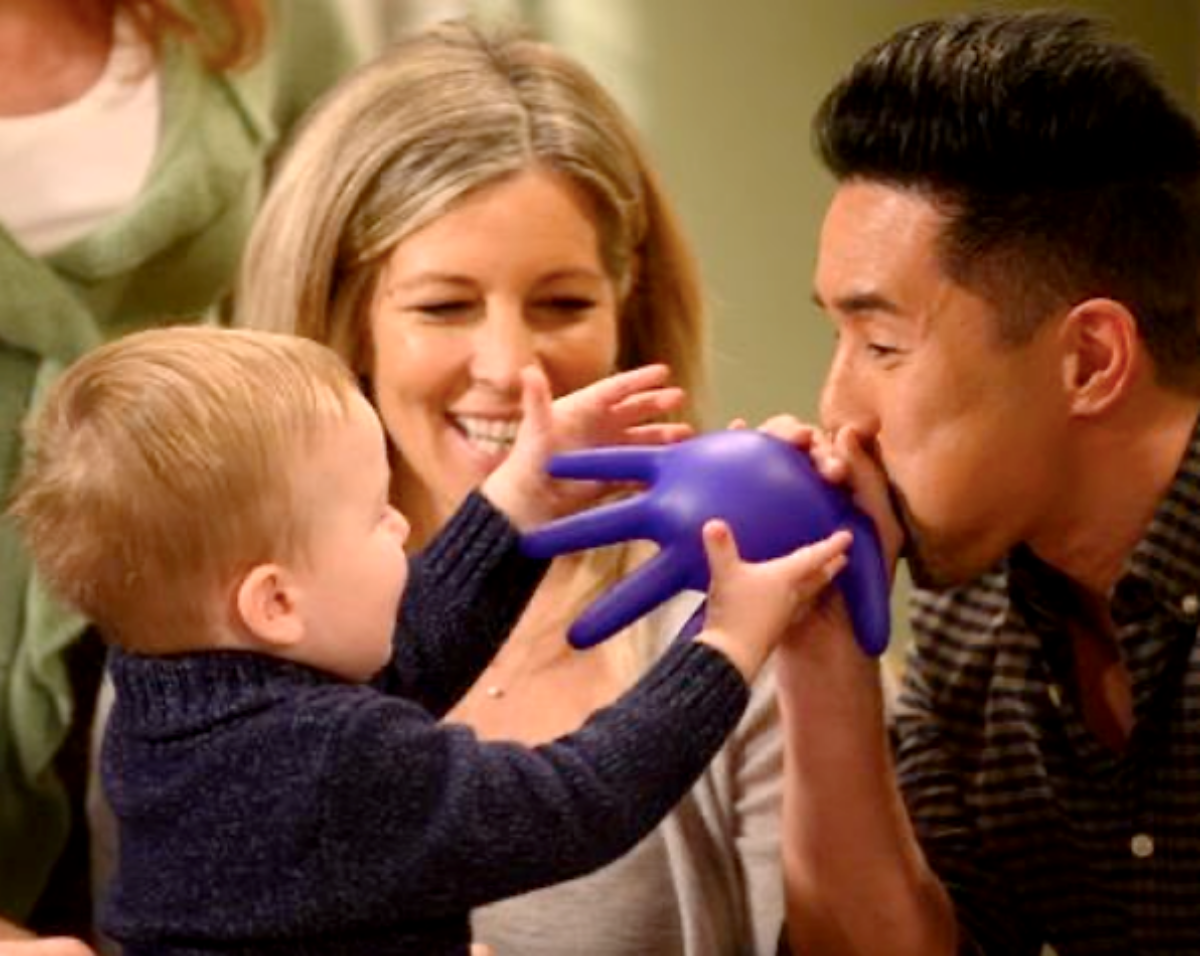 General Hospital spoilers teases that actor Parry Shen, of ABC’s General Hospital, shared a cute behind the scenes reveal with his tv son, played by twins Theo and Erik Olson recently via Instagram!

GH Spoilers:Theo or Erik Olson Is Shown Grabbing For A Latex Glove Blown Up Like A Balloon And Smiling

Parry doesn’t tell us if the baby in the photo is Theo or Erik, but he’s shown smiling and grabbing for a latex glove blown up like a balloon, with a smiling Laura Wright in the photo too. Parry wrote, “#GH Behind the scenes tidbit: We’d been shooting today’s Lucas wake up scene for a while and our Wiley was starting to get a bit fussy. Suddenly, @therealwildevry1 brilliantly grabs a nearby latex glove & blows it up to @theo_erik_olson ‘s delight.

So although I got to run with it on camera, all credit goes to Wil for the save! #teamworkmakesthedreamwork.” To provide a little context for the shot, this was a scene in a room of a rehab, where “Wiley Cooper-Jones”, played by both Theo and Erik, was brought in to see his other father, “Lucas Jones” played by Ryan Carnes, who had just come out of a coma.

Laura Wright plays “Carly Corinthos”, the older sister of “Lucas”, Parry plays his husband “Brad Cooper” and William, or Wil DeVry plays “Julian Jerome” “Lucas’” birth father and so he would be the adoptive grandfather with “Lucas” and “Brad” being the baby’s adoptive parents. That was a real grandpa-like move on the part of William DeVry!

General Hospital Spoilers: You Never Know What’s Going To Happen When There’s A Baby On A Television Set!

You never know what’s going to happen when there’s a baby on a television set! Recently, Parry also posted an outtake on Instagram, and all his social media and wrote: “Here’s what you DIDN’T see on today’s #GH right after Michael questions Brad being able to parent solo — me mustering every ounce of strength to keep from laughing before ‘cut was called.

Erik Olson was so in ‘the moment’ intently staring Brad down as if to say, “Smh. Yesterday you forgot to pack me a snack and today you were late for pickups. He’s right, dude. You’re losin’ it.” #outtakes” One can hear the laughter as Parry cracks up and some other laughing in the background as well!

As the old saying goes, kids DO say – and DO – the darndest things! “Michael” is character Michael Corinthos, played by Chad Duell, the baby’s godfather who had been called to pick up the baby from daycare when they couldn’t reach “Brad”.