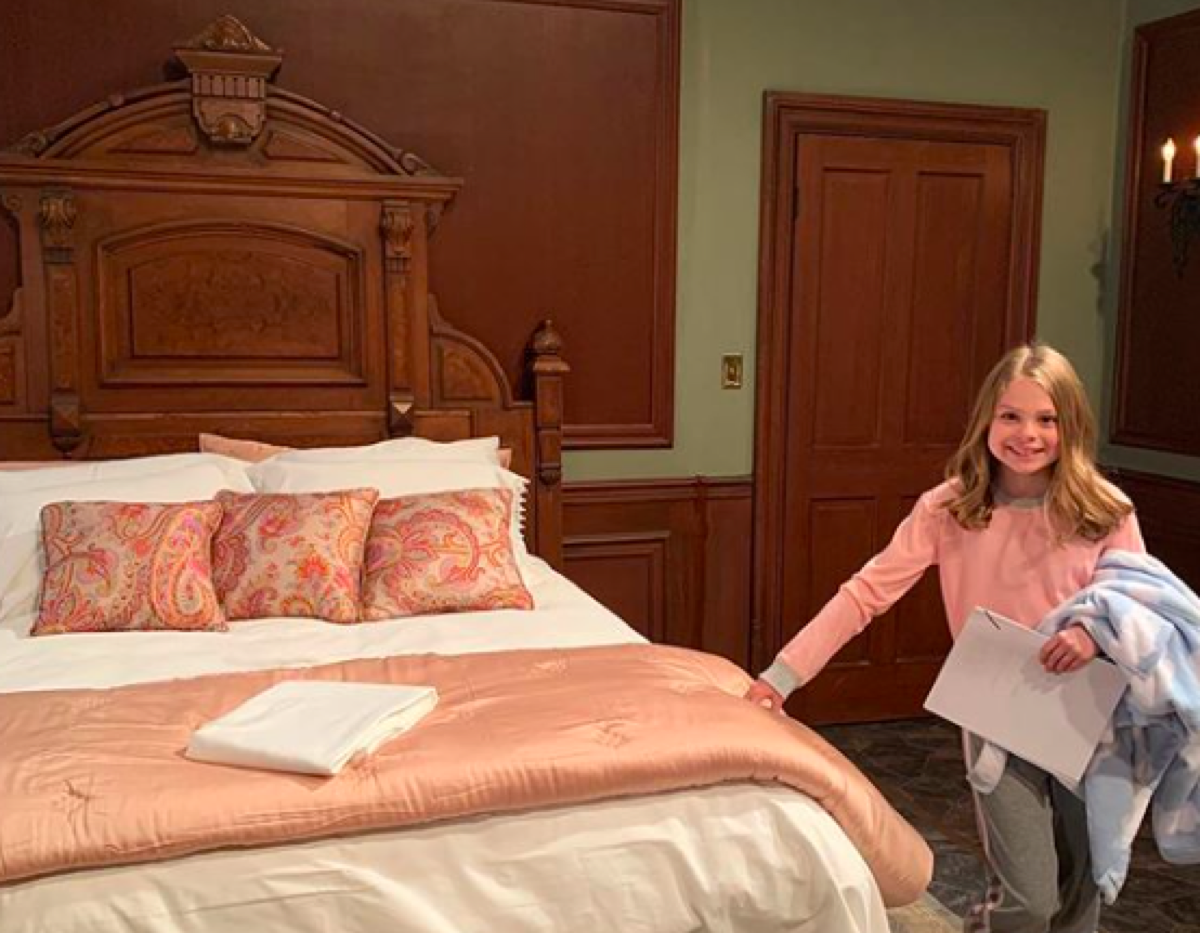 General Hospital (GH) spoilers reveal that ten year old General Hospital actress Scarlett Fernandez felt all grown up when she was filming in her television character Charlotte Cassadine’s bedroom on the set!

Charlotte lives in a castle, called “Wyndemere Castle” on ABC’s General Hospital and her bedroom doesn’t look like a little girl’s room – it looks more like a grownup’s and a very wealthy grownup at that! Scarlett posted on her Instagram account, “What did you think of my bedroom at Wyndemere?

I felt so grown up in it!” In the photo she posted she stands proudly by the bed, script in hand, and coat in arm. Her television sometimes stepmother “Nina Reeves” played by Cynthia Watros liked her post along with 2,619 others and the scenes filmed in this television studio set bedroom played out on the show over the last couple of days.

Scarlett’s character has been living the life of a little princess in a castle, on a large estate with horses and a stable, including her very own horse, on an island that one has to ride a ferry from the main part of the fictional town of Port Charles, New York to Cassadine Island where the castle sits. It has a secret tunnel that goes from a secret door in the living room clear into Port Charles near a park, although “Charlotte” never knew about the tunnel until her papa took her through it in yesterday’s General Hospital episode.

GH Spoilers: Charlotte Cassadine Is In The Middle Of An Impending Custody Battle

Right now her storyline has her at the middle of an impending custody battle between her mother and her father, with her father having gotten in a whole lot of trouble and fighting with her uncle, who was presumed dead for three and a half years, over the inheritance of the castle, its grounds, and Cassadine Industries, the family business. After her papa took her through the tunnels, she went home with her mother, with whom her father shares custody, and he was arrested and is currently trying to get bailed out of jail.

What did you think of my bedroom at Wyndemere? I felt so grown up in it! #scarlettischarlotte

A post shared by Scarlett Fernandez (@officialscarlettfernandez) on Jan 7, 2020 at 8:32pm PST

That’s a lot of drama for a little girl like Charlotte to be involved in, and a lot of dramatic scenes for Scarlett Fernandez to play, as she will need to act confused, scared and saddened by her father, whom she calls “Papa” having been arrested! Her television father, Valentin Cassadine is played masterfully by James Patrick Stuart, while her television mother, Lulu Spencer is played by Emme Rylan.